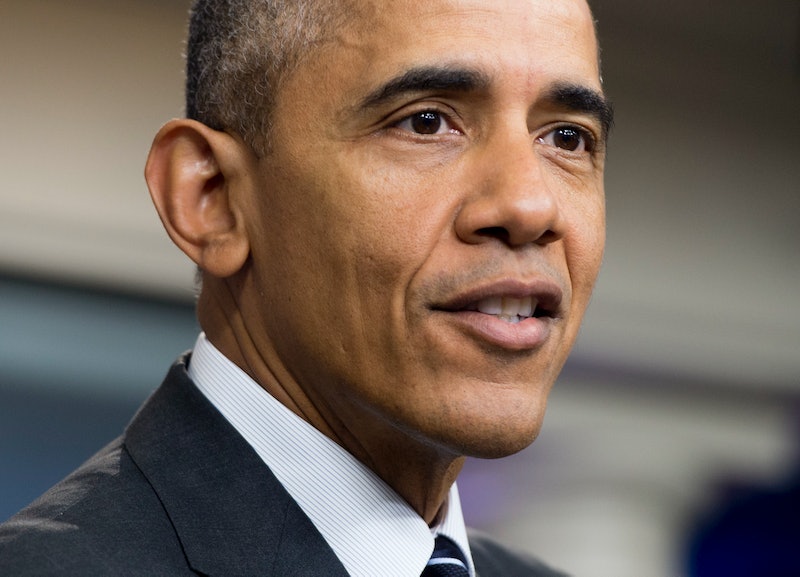 Obama spoke generously of the late justice, who was one of the court’s staunchest conservatives, ruling against some major Obama initiatives ― perhaps none bigger than the challenge to the Affordable Care Act in National Federation of Independent Business v. Sebelius. Obama praised the late justice as a "larger than life presence on the bench," well-known for his "incisive wit," and "colorful opinions."

Justice Scalia dedicated his life to the cornerstone of our democracy: the rule of law. Tonight, we honor his extraordinary service to our nation, and remember one of the greatest legal minds of our time.

Obama continued by expressing his condolences for Scalia's family ― he leaves behind his wife Maureen, and their nine children ― and then dropped some of the pressing political news that everyone's been waiting for. Namely, yes: he plans to nominate a successor to Scalia "in due time," even if the Republican Party tries to block whoever he picks.

That's not just idle speculation, either. With the GOP now facing the prospect of President Obama nominating a third justice to the highest court in the land ― a reality they desperately want to avoid, as a liberal filling Scalia's vacancy could reshape the court's partisan alignment for years ― there’s already been talk of them blocking any nominees until he's out of office next year.

But Obama's clearly not going to just let this go ― it was announced prior to his statements that he was going to fulfill his constitutional duty and pick a nominee, although obviously, it'll be up to the Senate just how far that goes. If they really did attempt to freeze the process in the hopes of a Republican winning the White House next year, however, it'd have a hugely derailing effect on the Supreme Court.

With just eight justices presiding, the chances of cases ending in ties skyrockets, and in the event of a tie, the outcome simply defaults to the most recent lower court ruling. In other words, the nomination fight that's coming won't just decide who'll be on the bench going forward, it could decide whether any real business can be taken care of by the highest court in the land for months to come.