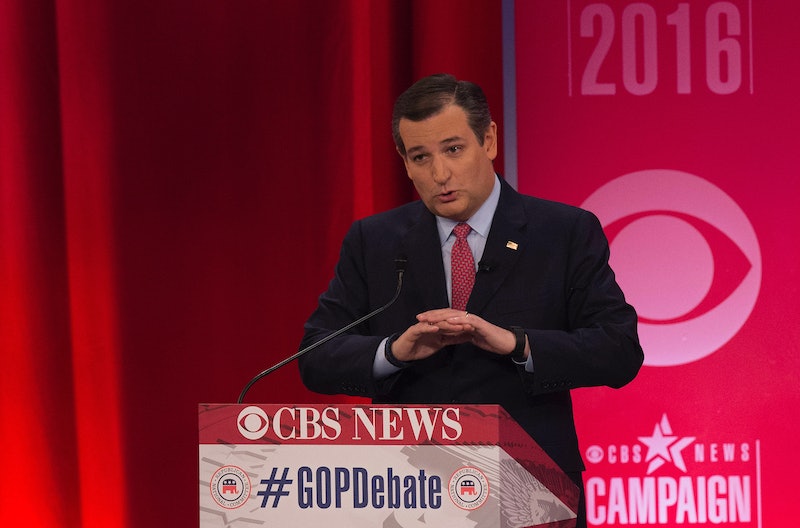 Along with the five other politicians gunning for the Republican presidential nomination in the 2016 election, Ted Cruz took to the debate stage in South Carolina Saturday night. Still trailing behind Donald Trump in South Carolina polls and in the New Hampshire primary, Cruz occupied the podium to the left of Trump. As the debate wrapped up, Cruz's closing statement focused on why it's so important for a Republican to be elected in 2016.

The debate moderator, CBS News anchor John Dickerson, questioned Cruz on issues ranging from the economy to foreign policy and didn't let him slide by with half-answers or evade questions. Because Trump and Cruz both needed a solid debate performance to ensure a victory at the polls Feb. 20, their personal attacks toward one another were in full force. Cruz attempted to swat away Trump's negativity and upset him with his own criticisms of the GOP frontrunner, claiming Trump isn't equipped to lead the country.

The Texas senator stuck to the conservative agenda he's touted since beginning his campaign throughout the debate, explaining that Supreme Court Justice Antonin Scalia's death represents why the 2016 election is so important for upholding the Constitution. He also got into quite a few tussles with Trump, yelling back and forth and trying unsuccessfully to talk over one another.

Take a look at how Cruz ended the debate with his full closing statement:

South Carolina, you have a critical choice to make. Our country literally hangs in the balance. Do you want another Washington deal maker, who will do business as usual, cut deals with the Democrats, grow government, grow debt, and give up our fundamental liberties? Or do you want a conservative? A proven conservative will stand and fight with you each and every day. Listen, repealing ObamaCare is not going to be easy. Passing a simple flat tax and abolishing the IRS is not going to be easy. But if we stand with the American people, we can do it. And today we saw just how great the stakes are. Two branches of government hang in the balance — not just the presidency, but the Supreme Court. If we get this wrong, if we nominate the wrong candidate, the Second Amendment, life, marriage, religious liberty, every one of those hangs in the balance. My little girls are here — I don't want to look my daughters in the eyes and say we lost their liberties. Who do you know will defend the Constitution and Bill of Rights? And as a commander in chief, who do you know will stand up to our enemies as the calm, steady, deliberate strength to defeat our enemy, to secure the borders, and to keep America safe.

Bringing up the death of Justice Scalia again, Cruz really emphasized why the GOP (and he in particular) need to win in November to protect Americans' rights.