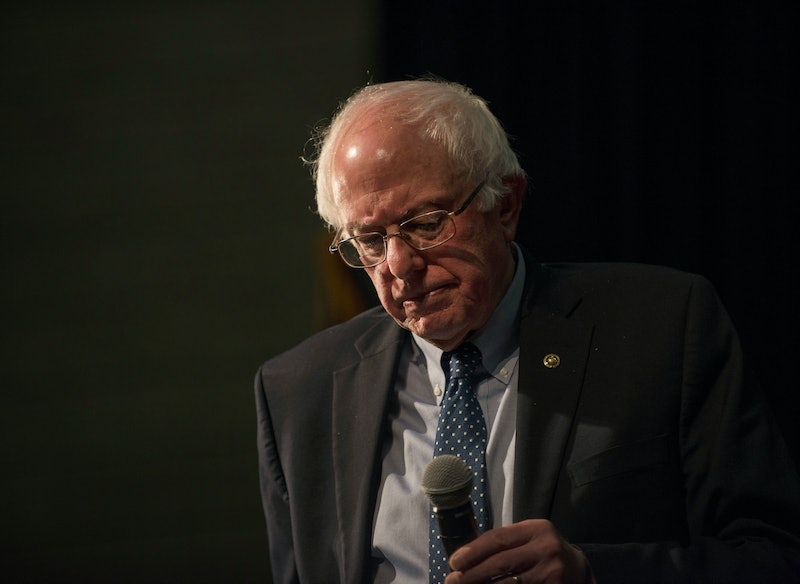 The ninth GOP debate took place on Saturday night at the Peace Center in Greenville, South Carolina. The Palmetto State has been front and center for Republicans as they eye an upcoming South Carolina Primary, to be held in just one week on Saturday, Feb. 20. Presidential hopefuls as well as citizens across the country are also mourning the loss of U.S. Supreme Court Justice Antonin Scalia, who died of natural causes on Saturday. The stage was set for an undoubtedly heated, emotional debate but few could predict what unfolded between the six remaining Republican candidates. Infighting, audience unrest, and a harried moderator made for much to be discussed. Bernie Sanders' response to the GOP debate perfectly sums up one of the primary reasons for the chaotic debate environment.

Sanders was once again silent throughout the GOP debate itself, instead shifting his focus towards the Democrats' upcoming Nevada Caucus. The Vermont senator has been campaigning in the Silver State but still took the time to issue a lone tweet appearing to condemn Republican frontrunner Donald Trump following the event. According to Forbes, Trump's estimated wealth is less than one billion dollars, though the Donald maintains that he is valued at $3 billion. Trump's bombastic claim most certainly appears to jive with his debate performance, in which viewers saw the real estate mogul at his most combative and angry yet.

Trump was repeatedly booed by the debate audience, appeared to alienate the political establishment in general in his closing statements, and continued to attempt to boast about his business ventures, taking more time to fight with fellow candidate Jeb Bush than he did to outline the controversial policies he's been plugging for months. Sanders' tweet highlights the frustration that many voters were feeling as they watched the debate unfold. The candidate used his debate response to not only call out Trump but highlight his own platform.

Sanders is firmly committed to fighting income inequality. Like Trump, he has repeatedly gone after campaign donors and what big business dollars may potentially influence when money from corporations is thrown into campaign coffers. This appears to be the only point where Sanders and Trump have common ground, however. The Vermont senator's tweet is a firm reminder to focus on more important things than political posturing and infighting. Rather than running moderator John Dickerson into the ground with arguments, Sanders appeared to be seeking a more substantial debate. Perhaps the GOP's tenth debate, to be held on Feb. 25, will offer Sanders and the American public something more.