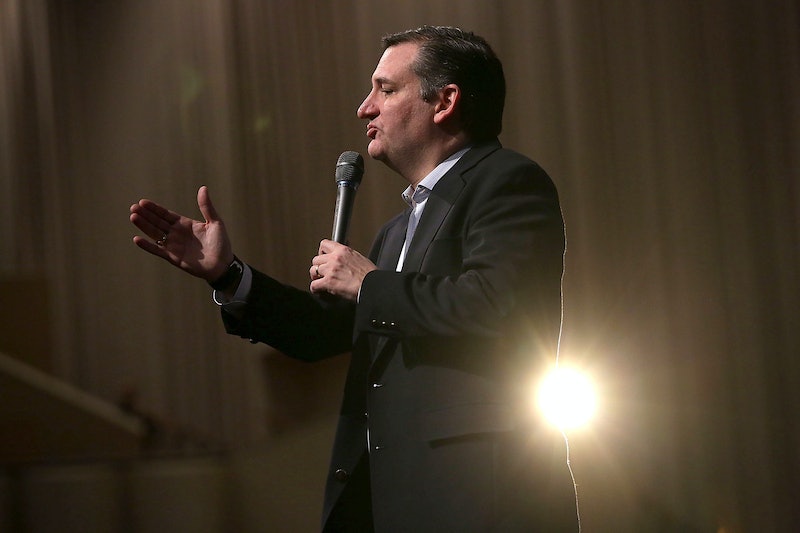 The ninth GOP debate took place on the exact same day that U.S. Supreme Court Justice Antonin Scalia was found dead in West Texas. The Associate Justice's death took the country by surprise and has been a major talking point during the Saturday night debate. Moderator John Dickerson immediately called for a moment of silence for Scalia then kicked things off with questions about the justice as well as who should be nominating his successor. One candidate in particular stuck out with his answer on this historic moment that has left the country in mourning. Ted Cruz got one big thing wrong when it came to his SCOTUS knowledge and was immediately called out by Dickerson.

"The senate needs to stand strong and say 'we're not going to give up the U.S Supreme Court for a generation by allowing Barack Obama to make one more liberal appointee,'" Cruz said before launching into a speech about how what is currently unfolding is an unprecedented moment in American history. He erroneously stated that no SCOTUS justice has been confirmed during an election year in eight decades. "We have 80 years of precedent of not confirming in an election year," Cruz said, only to be stopped by Dickerson, who requested a clarification. Dickerson brought up current Associate Justice Anthony Kennedy, who was confirmed in 1988.

Cruz acknowledged that Kennedy was indeed confirmed, though he erroneously stated that the confirmation took place in 1987, which wouldn't have been an election year. He threw in details about a failed LBJ justice nomination which were entirely inconsequential and didn't change the fact that Cruz had gotten the year completely wrong. Kennedy was nominated Nov. 30, 1987 and was confirmed on Feb. 3, 1988. When Dickerson continued to press Cruz, the Texas senator became verbally combative and Dickerson was booed for stating that he "just wanted to get the facts straight."

The candidate appears to be in a tailspin of sorts following the heated, awkward exchange. Though Dickerson was booed, the moderator has consistently excelled in his responsibility of presenting facts and challenging candidates throughout the incredibly heated debate. As a moderator, the journalist is seeking to help presidential hopefuls clarify their platform while the candidates make their case for the highest office in the land. Cruz's inability to accept that he was wrong certainly doesn't bode well and may be a sign of difficulties to come in his campaign.