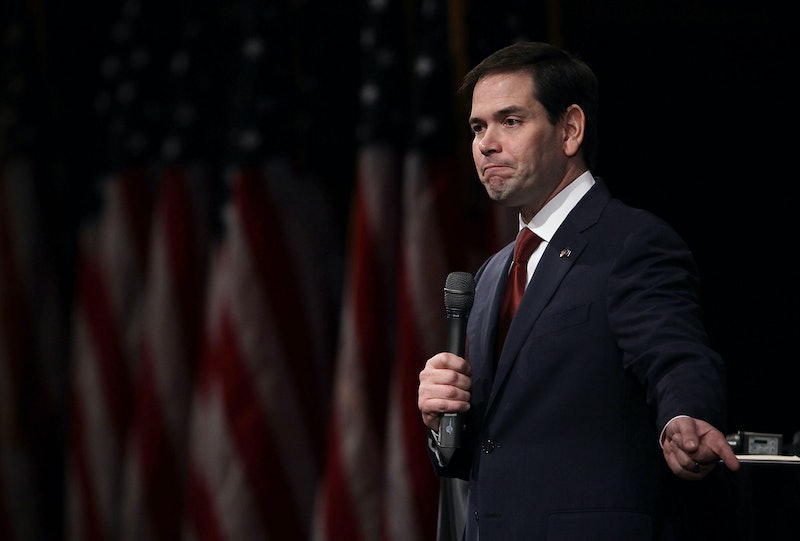 On Saturday night, the political world juggled two very different events: the death of Supreme Court Justice Antonin Scalia, and the ninth GOP presidential debate. The former definitely cast a shadow over the latter, as moderator John Dickerson began the showdown with a moment of silence for Scalia, and led-off with questions about the nomination fight that's sure to follow. And based on how things went, you might wonder if the unexpected news threw one Republican contender off his game ― Marco Rubio's closing statement brought his disappointing debate to an end.

Rubio came into Saturday night with a lot on the line, after turning in what may have been the most disastrous performance of the 2016 campaign season in the eighth debate in New Hampshire. Fortunately for him, he managed to avoid any of those cringe-inducing "Marco-bot" moments that sunk him last time around ― it probably didn't hurt that Chris Christie wasn't around the roast him anymore ― but in terms of scoring big hits, he largely came up empty.

Thank you, thank you for watching tonight. This is a difficult time in our country. Our economy's flat, it's not creating the jobs it once did, people struggle living paycheck to paycheck. Our culture's in trouble, wrong is now considered right, and right is considered wrong, and all the things that once held our families together are under constant assault. And around the world, America's reputation's in decline. Our allies don't trust us, our adversaries don't fear us, Iran captures our sailors and parades them before the world on video. These are difficult times.

But 2016 can be a turning point. That's why I'm running for president, that's why I'm here today to ask you for your vote. if you elect me president, we are going to re-embrace free enterprise, so that everyone can go as far as their talent and their work will take them. We are going to be a country that says that life begins at conception, and life is worthy of the protection of our laws. We're gonna be a country that says that marriage is between one man and one woman. And we are going to be a country that says the Constitution and the rights that it talks about do not come from our President, they come from our creator. And we are going to be loyal to our allies like Israel, not enemies like Iran. And we will rebuild the U.S. military so no one will dare test it. Vote for me, I will unify this party, I will grow it, we will win this election, and we will make the 21st century a new American century.

Well, you can mark Rubio down for "let's make same-sex marriage illegal again." All things considered, this was a pretty socially conservative speech ― the line "wrong is now considered right, and right is considered wrong" carries a lot of baggage, and lets the listener fill in whatever blanks they want to. Also, for somebody who's been accused of repeating himself, ending with "a new American century" isn't a great look.

On the whole, while it wasn't a bad debate, exactly ― Rubio did sting Cruz for "lying about Ben Carson in Iowa," which earned him some nice applause ― and his expectations going in were very, very low, it was a pretty "meh" performance all around. And considering how badly his campaign faltered in New Hampshire ― he needed to do far better. It'll be fascinating to see how he fares when South Carolinians turn out to vote, as he's currently trailing Trump by about 20 points.