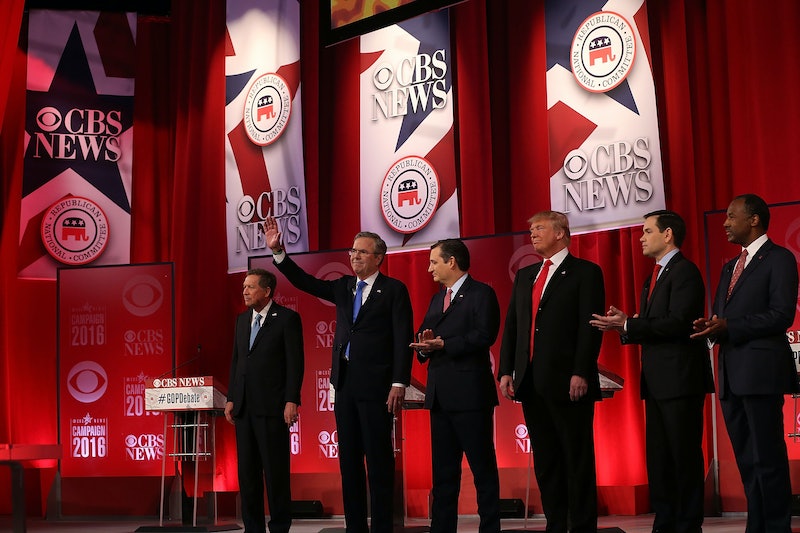 The six candidates that remain the race for the GOP's 2016 presidential nomination went head to head on the debate stage in South Carolina Saturday night. Just a week before the state holds a Republican primary Feb. 20, tensions were high and every candidate tried very hard to come off as strong, prepared, and presidential. Hilarious memes and jokes about the GOP debate were fueled by all the one-on-one clashes and heated moments.

Donald Trump entered the GOP debate in full force, personally attacking all of his opponents any time he got the chance. It will be a real shock if he's able to talk tomorrow after all the screaming. Although the billionaire usually gets applause for his loud criticisms, the crowd in South Carolina wasn't feeling his angry tactics and booed him pretty frequently. Jeb Bush and Ted Cruz did well for themselves by standing up to Trump and attacking him right back, giving him a taste of his own medicine. More so than any specific issue of policy plan, all the scuffles stood out in viewers' minds and seemed to overshadow the substantive questions CBS News asked the six men on stage. Because the intense arguments were so attention-grabbing, they inspired quite a few jokes.

Check out some of the funniest GOP debate memes and jokes on Twitter that poke fun at the candidates running for the highest office in the U.S. government.

On The Maury Show

Let's just say, it was intense.