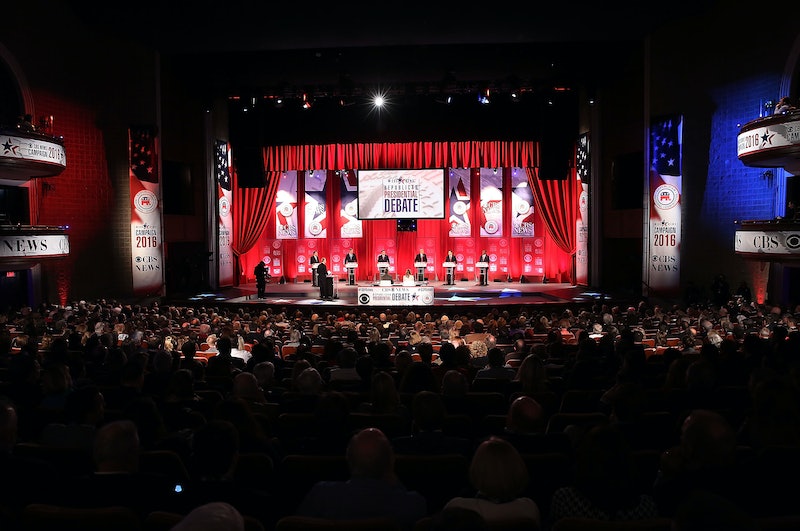 Saturday night, the six men still in the running for the GOP's 2016 presidential nomination battled on the debate stage in South Carolina. With the state's Republican primary only a week away, the conservative contenders needed to convince South Carolina voters — and the whole nation — that they're the most qualified to represent the party, protect Americans' liberties, and lead the country. The GOP debate winner made a comeback from previous mediocre performances, and Jeb Bush finally got his moment in the spotlight by boldly attacking Trump.

While the debate as a whole was pretty chaotic, the former Florida governor had his best performance yet. Criticized for appearing weak next to Trump early on in the 2016 race, Bush finally attacked the GOP frontrunner with everything he had. In response to Trump saying the U.S. should work with Russia in the fight against ISIS, Bush said: "It is absolutely ludicrous to suggest that Russia could be a positive partner in this." In true Trump-fashion, the businessman threw a lot of random insults into his rebuttal, including mentioning that one of Bush's supporters, Lindsey Graham, polled at zero percent when he was still in the race, but Bush was ready for everything Trump threw his way.

One of Bush's best quips about Trump was when he said: "This is a man who insults his way to the nomination." Clearly sick of being bullied by the real estate tycoon, Bush fought back this time. Trump continuously criticized George W. Bush for the Iraq War and not protecting America against terrorist attacks, and Bush defended his brother and asserted that the debate wasn't about his family, but the voters. The crowd loved Bush's new, stronger persona and booed Trump on multiple occasions.

Wait, there's more. Trump called Bush "the weakest person on this stage by far on illegal immigration," and Bush responded by saying: "If you want to talk about weakness, you want to talk about weakness? It's weak to disparage women. It's weak to denigrate the disabled. And, it's really weak to call John McCain a loser." All Trump could say was, "I don't know what you're talking about." Bush was finally able to get under the much louder candidate's skin and successfully point out some of his flaws on stage.

In order to stay in the race, Bush really needs to do well in the South Carolina primary next week, and his debate performance could make that happen. Showing up Trump and leaving him floundering throughout the debate proved that he can face his enemies and isn't afraid to get tough. Because of the on-stage feud, he also got a lot of talking time, which definitely can't hurt his attempts to make an impact on Americans watching in the audience and from home. After months of making little progress, Bush might make a real comeback after his debate victory.