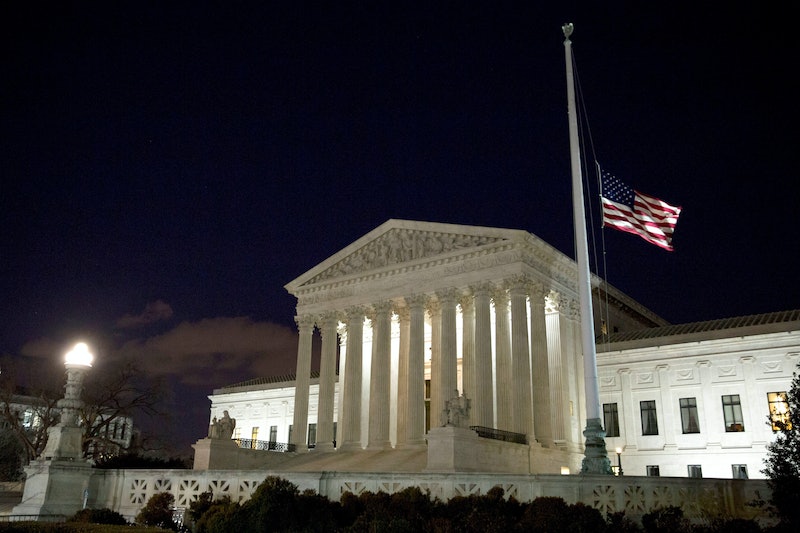 The Supreme Court usually decides several cases a year, but few of them attract the national attention of, say, last summer's landmark gay marriage ruling. On Saturday, Americans turned their attention to the high court for a different, much more somber reason, as news broke that Justice Antonin Scalia passed away unexpectedly. As the country, his family, and his colleagues on the bench mourn the loss of Scalia, there will be a noticeably empty seat when the Supreme Court hears a major abortion case next month.

The Supreme Court will remain in a pre-scheduled recess during the week following Scalia's surprising death. When the court returns on February 22, it will be just about a week away from hearing Whole Woman's Health v. Hellerstedt, a Texas abortion case for which oral arguments are set to start on March 2. The case deals with a now-infamous abortion law in the Lone Star State, known as HB 2. HB 2 was enacted in 2013 and contains five different abortion-related restrictions, including a ban on abortions at 20 weeks post-fertilization and new reporting requirements for physicians who perform abortions.

The Supreme Court case will focus, as lower court cases have, on two conditions that HB 2 places on abortion clinics. Under the law, clinics must have admitting privileges at a hospital within 30 miles of the clinic. Additionally, abortion clinics must qualify as ambulatory surgical centers, meaning, among other things, that they must have wider hallways and larger operating rooms than clinics tend to be built with.

As Vox has reported, these restrictions may force clinics to close, and unnecessarily so. Abortion clinics have made the case that these restrictions, namely the requirement for clinics to qualify as an ambulatory surgical center, would cost upward of $1 million to implement. At the same time, the argument for the ambulatory surgical center requirement — that abortion clinics need to be ready to perform a hospital-grade emergency surgery in case of complications — may be unwarranted. Fewer than one percent of first-trimester abortions result in such complications.

In fact, there's evidence that HB 2's restrictions have already forced several clinics to close in Texas. Fourteen clinics have closed because they have been unable to obtain admitting privileges at a local hospital. The law may also be causing women to find it harder to get an abortion in the state. According to the University of Texas's Texas Policy Evaluation Project, wait times for abortions have increased in Dallas by as many as 15 days since HB 2 became law. As wait times increase, the potential for women to seek illegal second-trimester abortions may also increase.

When the Supreme Court hears the case, it will apply a standard from a previous abortion-related case, Planned Parenthood v. Casey. That case, which was decided in 1992, dealt with a Pennsylvania abortion law that sought, in part, to require a married woman to certify that she had informed her husband of her decision to have an abortion. In Planned Parenthood v. Casey, the high court applied an "undue burden" standard, which it said rendered a law invalid if "its purpose or effect is to place substantial obstacles in the path of a woman seeking an abortion before the fetus attains viability." In the 1992 case, the court decided that the husband notification requirement did, in fact, place an undue burden on women seeking an abortion.

In the upcoming case, the undue burden standard will likely be applied in the context of a woman's access to an abortion clinic. If HB 2 causes significant closures of abortion clinics across the state, as lawyers for the clinics have argued, women could be forced to travel more than a hundred miles to get an abortion. Add to that the long delays that women are currently experiencing in obtaining an abortion, and the court may find that HB 2 results in an undue burden on women seeking an abortion.

The court's decision in Whole Woman's Health v. Hellerstedt could have implications far beyond Texas, but it's not the only case that the Supreme Court will hear that pertains to the state. The court has announced that it will also review cases related to Texas laws that deal with redistricting, immigration, and affirmative action. Interestingly (but unrelated aside from the coincidence factor), Justice Scalia died over the weekend while on a trip to the Lone Star state.