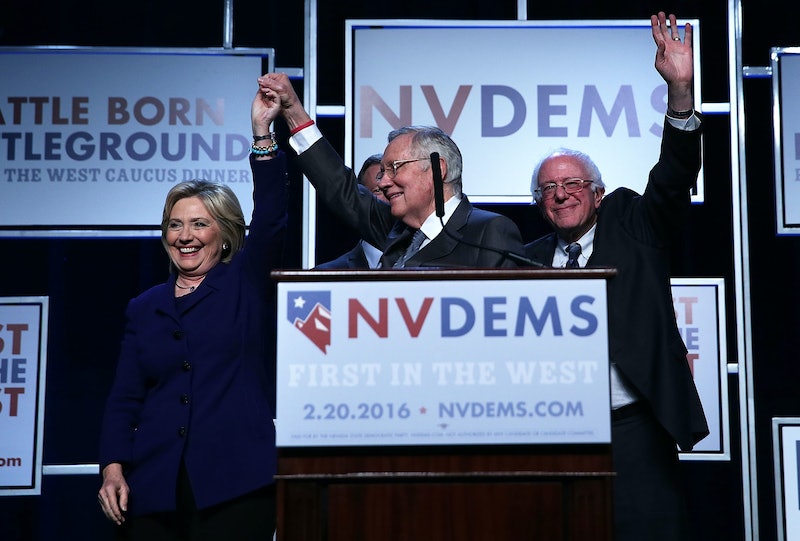 Even the most ardent political enthusiast will admit presidential primaries can be confusing. Talk of delegates, superdelegates, the states' primary order, county and state conventions, and voter turnout can make the head of any well-informed voter spin. Who's using the power of persuasion in caucuses and who's casting secret ballots in more structured primary events gets even more complicated when there's confusion over who's voting when. This year, Democrats in Nevada will caucus at the same time registered members of the GOP in South Carolina are set to cast ballots in their own state's primary. Missing from the action next Saturday will be Nevada's Republican voters and South Carolina's Democrats, who are not slated to head to the polls until the following week. So, why are the Nevada caucuses at different times for Democrats and Republicans?

Nevada hasn't been considered "First in the West" for long. Its early-state legacy pales in comparison to those of Iowa and New Hampshire. In fact, the state only gained early-state status in the presidential primaries in 2008 when the national parties sought to expand on the importance placed on Iowa and New Hampshire with the addition of a southern and western state. South Carolina was selected to represent the South with Nevada moved up in the primary schedule represent voters in the West thanks largely in part to Sen. Harry Reid's heavy lobbying.

This year, Democrats in The Silver State will hold precinct caucuses Saturday whereas the state's Republican party has opted to hold off on caucusing until the following Tuesday, making Nevada the third and fourth state, respectively, to roll out results in the nation's primary electoral event. In 2008, the parties opted to caucus on the same day. They aimed to do the same in 2012, but a last-minute schedule change had Democrats and Republicans in Nevada caucusing two weeks apart. But why the varying caucus dates?

The simple answer is that the Democratic National Committee and the Republican National Committee are left to their own devices when it comes to running the primaries. There's nothing in the Constitution that dictates how, when, or even if primary elections should be held. The entire primary election process was created and modified over time by the political parties, and they still get to dictate all the rules. Although how or when one party holds its primary can sometimes influence the other party's primary format and scheduling, Republicans and Democrats are under no obligation to collaborate on anything, not even to ensure registered members of both parties cast their vote in one state on the same day.

The official website of the National Republican Committee claims states are given the freedom to choose the date and format of their own GOP primary event. However, it seems both national parties may have more sway over the timing of primary events in the first four states than they're letting on, meaning the state of Nevada isn't to blame for any confused GOP caucusgoers who show up Saturday to find their caucus locations closed. A primary calendar submitted in May 2014 to the Democratic National Committee for approval by the party's Rules and Bylaws Committee proposed the party's Nevada caucuses be held no later than Feb. 20. At the time, it was believed the Democrat's proposed schedule closely aligned with the Republican National Committee's earlier released primary election blueprint, the Las Vegas Review-Journal reported.

According to USA Today, however, the Republican National Committee later chose to bar Nevada's GOP from holding their caucus at the same time as the party's South Carolina primary. But given that March will see days were upwards of five states will hold simultaneous primaries or caucuses, why the party's concern over coinciding primary events?

Like many things in politics, the answer isn't exactly transparent. The National Republican Party may have decided to put South Carolina center stage on Saturday because it's a traditional conservative stronghold for the party, whereas the swing state of Nevada has seen significant drops in GOP caucus turnout. Only 8 percent of Nevada's registered Republican voters showed up to caucus in 2012, a significant drop from the roughly 11 percent that participated in 2008, the Las Vegas Sun reported. The party could feel South Carolina can provide a clearer picture of voters' opinions and thus better help narrow the party's expansive field of candidates.

The fact voters from both political parties are not participating in caucuses held across Nevada this Saturday doesn't diminish the importance of what's happening in the first Western state to cast its vote in the primary election. But it will be interesting to see if confusion over who votes when ends up affecting caucus turnout. One thing is for certain while Republicans and Democrats practice the art of the slow reveal in Nevada and South Carolina, voters nationwide are eager to see how results in the two states' primary events will impact presidential candidates' campaigns, even if they have to wait a few days between caucuses.