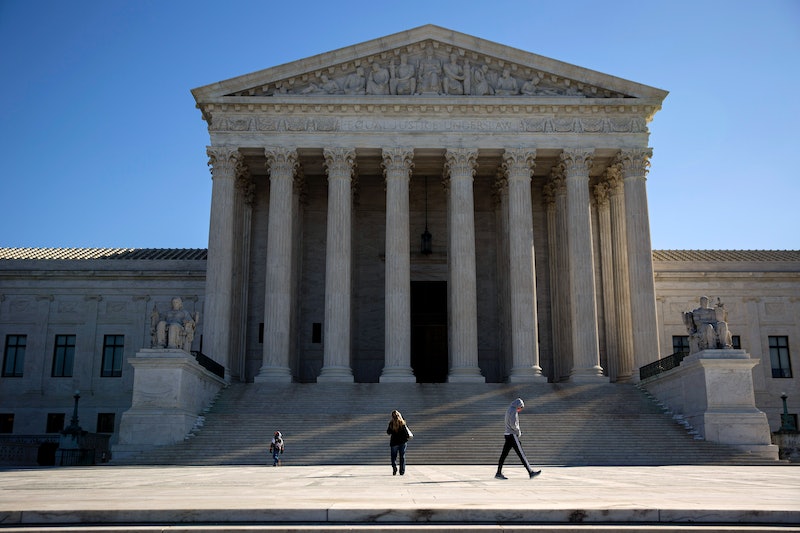 Supreme Court Justice Antonin Scalia's shocking death on Saturday has left an unexpected hole in the highest court in the land. While legislators fight over who will fill it and when, the four-on-four liberal versus conservative showdown will begin when the Court hears cases again starting Feb. 22, which might not be a good thing for women's rights. Three incredibly important cases for women are coming before the Court next month, and the split court makes the fate of each ruling a bit more unpredictable. For women, a split Supreme court means several potentially momentous decisions that could have a big impact for years to come.

The first women's rights case to come before the Court is Whole Woman's Health vs. Hellerstedt, which is attempting to strike down a Texas bill which requires abortion providers to have admitting privileges at a local hospital and mandates that abortion clinics meet classification as an ambulatory surgical center. Proponents of the bill said that the new regulations protect patients from emergency situations. However, the bill's primary effect was the closure of more than half the state's abortion clinics and cutting off nearly 1 million women in rural parts of the state from accessing abortions.

Those who want the bill overturned say it violates the Supreme Court's ruling from the 1992 case Planned Parenthood vs. Casey, which decreed that states cannot place an "undue burden" on women seeking abortion care. The best case scenario for abortion rights activists is a five-to-three decision, with the swing vote most likely coming from Justice Anthony Kennedy, but perhaps more likely is a four-to- four split ruling, given Kennedy's history with abortion rights. A split would mean the lower court's ruling would stand and the bill could be enforced throughout the state, but the defendants could also come back to argue the case again when the bench is filled out.

Next, the Court will hear a slew of arguments by religious organizations trying to fight the Affordable Care Act's mandates to provide contraception and abortifacients. Scalia sided with the conservative bloc in the five-to-four ruling on the Hobby Lobby case back in 2014, so his missing vote shouldn't affect these decisions too much. Many of these arguments will be decided with precedent from the Hobby Lobby decision, so women can expect a lot of split decisions, meaning more birth control restrictions at least until a new justice is chose, in this case too.

Finally, March 28 will bring arguments in the case of CRST Van Expedited vs. Equal Employment Opportunity Commission. More than 150 women came forward with claims of sexual harassment against the Iowa-based trucking company, which is still arguing against the appellate court's decision to deny the company legal fees from the defendants. A win for the EEOC would mean a big victory for women fighting against sexual harassment in the workplace, and it might be a more locked up decision than the more hotly contested topics of reproductive rights.

A split Supreme Court isn't really a good thing for anyone, but with several big cases coming up for women's rights, it's especially nerve-wracking to not have a full bench. The good news is that any of these split decisions can be reargued when another justice joins the Court — split decisions uphold the lower court's rulings but don't establish precedent, so defendants can present cases again in the future.