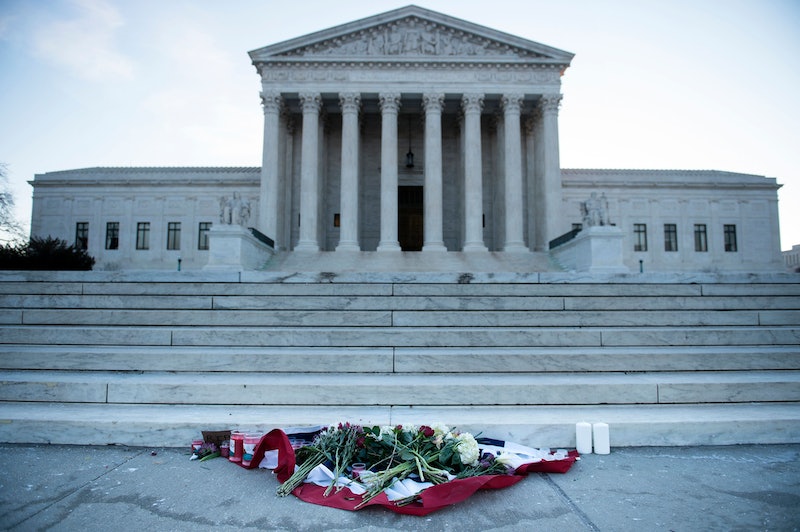 Justice Antonin Scalia passed away on Saturday, Feb. 13, at age 79 from a heart attack while away on a hunting trip at Cibolo Creek Ranch in Texas. He was appointed by President Ronald Reagan and served on the nation's highest court for three decades. And in the wake of the Supreme Court justice's sudden death, his colleagues from both sides of the partisan line had some touching tributes in remembrance of Scalia, an influential man and a strong, discerning legal mind.

Despite his conservative inclinations, Scalia used his objectivity to the best of his ability to put through that which he considered fair, and reject that which he deemed unconstitutional. He was called the anchor of the originalist and textualist positions on the Supreme Court's conservative wing during his career. He was also the first Italian-American justice to serve on the court. Above all, his colleagues will remember how he stood by his mind, as well as his unwavering loyalty to America. Not only his fellow justices, but the nation at large, will remember him for that.

His Supreme Court colleagues and former colleagues had the following to say on the life of this memorable person.

He was an extraordinary individual and jurist, admired and treasured by his colleagues. His passing is a great loss to the Court and the country he so loyally served.

In years to come any history of the Supreme Court will, and must, recount the wisdom, scholarship, and technical brilliance that Justice Scalia brought to the Court. His insistence on demanding standards shaped the work of the Court in its private discussions, its oral arguments, and its written opinions.

Yet these historic achievements are all the more impressive and compelling because the foundations of Justice Scalia’s jurisprudence, the driving force in all his work, and his powerful personality were shaped by an unyielding commitment to the Constitution of the United States and to the highest ethical and moral standards.

Justice Scalia was a good man; a wonderful husband who loved his wife and his family; a man of strong faith; a towering intellect; a legal giant; and a dear, dear friend. In every case, he gave it his all to get the broad principles and the small details right

Toward the end of the opera Scalia/Ginsburg, tenor Scalia and soprano Ginsburg sing a duet: 'We are different, we are one,' different in our interpretation of written texts, one in our reverence for the Constitution and the institution we serve. From our years together at the D.C. Circuit, we were best buddies. We disagreed now and then, but when I wrote for the Court and received a Scalia dissent, the opinion ultimately released was notably better than my initial circulation. Justice Scalia nailed all the weak spots—the 'applesauce' and 'argle bargle'—and gave me just what I needed to strengthen the majority opinion. He was a jurist of captivating brilliance and wit, with a rare talent to make even the most sober judge laugh.

Nino Scalia was a legal titan. He used his great energy, fine mind, and stylistic genius to further the rule of law as he saw it. He was man of integrity and wit. His interests were wide ranging as was his knowledge about law, this Nation and its Constitution. He loved his family. He also loved ideas, music, and the out of doors. He shared with us, his colleagues, his enthusiasms, his humor, his mental agility, his seriousness of purpose. We benefitted greatly. His contribution to the law was a major one. Our hearts go out to Maureen and his family. We have lost a fine colleague and a very good friend. We shall miss him hugely.

Nino was a remarkable person, and I feel very honored to have known him and to have had him as a colleague. He was a towering figure who will be remembered as one of the most important figures in the history of the Supreme Court and a scholar who deeply influenced our legal culture. His intellect, learning, wit, and memorable writing will be sorely missed, and Martha-Ann and I will deeply miss him as a friend.

My colleague Nino Scalia was devoted to his family, friends, our Court, and our country. He left an indelible mark on our history. I will miss him and the dimming of his special light is a great loss for me. My thoughts are with Maureen, his children, and his grandchildren.

Nino Scalia will go down in history as one of the most transformational Supreme Court Justices of our nation. His views on interpreting texts have changed the way all of us think and talk about the law. I admired Nino for his brilliance and erudition, his dedication and energy, and his peerless writing. And I treasured Nino’s friendship: I will always remember, and greatly miss, his warmth, charm, and generosity.

I am deeply saddened to learn of the passing of my dear friend and colleague, Justice Antonin Scalia. Nino was a tireless public servant who left an indelible mark on the Court and on our jurisprudence. His gifts of wisdom, wit, and wordsmithing were unparalleled, and he will be sorely missed.

Nino Scalia was a good friend, a brilliant man with an incomparable sense of humor, and as articulate as any Justice who ever served on the Court. He has had a major impact on the development of the law, and earned the respect of all his colleagues. We will all miss him.

Nobody outside or inside the court knows what lies before them in the coming weeks, but one thing is for certain: there was only one Justice Antonin Scalia, and consent or dissent with his Constitutional interpretation, he will be sorely missed.