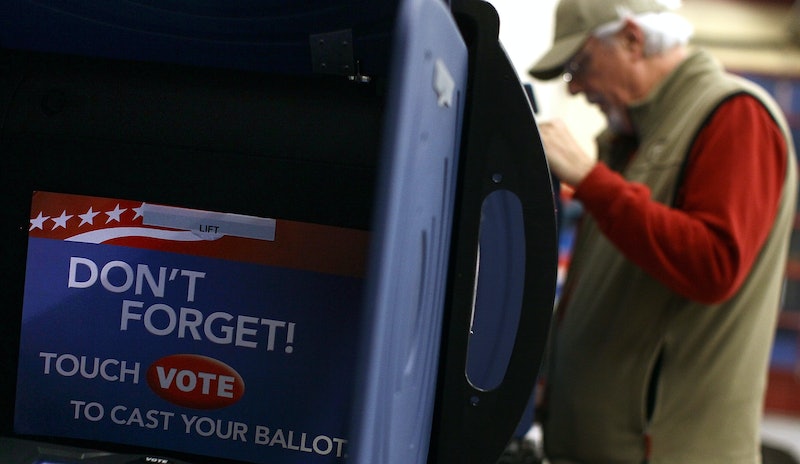 Voters in South Carolina will cast ballots in the state’s presidential primary this month, with Republicans voting Saturday and Democrats the following weekend. The state hosts the first vote in the South and will be the third state to head to the polls in the GOP’s presidential primary race and the fourth for Democrats. So far 2016 has seen record voter turnout in both Iowa and New Hampshire, and the trend is expected to continue in South Carolina. But exactly just how many people will vote in South Carolina's primary?

South Carolina GOP Chairman Matt Moore has predicted the state will see record turnout with at least 650,000 ballots cast in Saturday’s Republican primary, the Post and Courier reported. For comparison, a total of 605,623 votes were cast in the party’s 2012 primary, according to the state's Republican Party. Across the aisle, the state's Democratic party has yet to release its voter turnout estimate, but new voter ID laws might cause a decrease in turnout. The South Carolina State Election Commission reported the state’s registered voters have grown to close to 3 million, meaning confusion over voter ID laws aside, there could still be record-breaking numbers seen at the polls for the state ranked 38th in the nation for voter turnout in 2012.

Forecasting voter turnout down to exact numbers is difficult, but it’s safe to say the 2016 presidential race has piqued the interest of more Americans than either of the past two. A national study conducted in December by the Pew Research Center found 48 percent of surveyed eligible voters had “a lot” of interest in the 2016 presidential campaign, compared to just 35 percent in 2008. But what factors help push voters past mere interest and into the voting booth during primaries?

The more candidates are able to infuse their support base with enthusiasm and engagement, the more voters are likely to participate in primaries. Voters are also more likely to turn up for a primary when media coverage of a party’s campaign is heavily covered and depicted (often sensationally) as a close race, as the GOP primary has been this year. Bernie Sanders' New Hampshire win and narrow tie in Iowa have forced the media to rename him a "Serious Contender" and could move more voters to feel their opinion counts, driving them to participate in the Democratic primary.

Both parties make several efforts to encourage high voter turnout in South Carolina's primary, such as allowing absentee voting and hosting open primaries that not only allow Independents to participate, but allows cross-party mixing. Even the Palmetto State’s decision to hold its primary during the weekend is an attempt to increase voter turnout by limiting potential work conflicts.

Further contributing to predictions South Carolina will see high voter turnout in the Republican primary this year is the state’s history at the party's polls. A report on Republican primary turnout in 2012 by the Bipartisan Policy Center revealed South Carolina saw some of the highest turnout of the first 13 states to hold primaries during a year when the GOP struggled to draw disengaged voters to the polls. In that year, the state’s Republican primary contest saw 17.3 percent of eligible voters turn up – a jump from 13.5 percent in 2008, but a noticeable drop from the 19.5 percent recorded in 2000. That same year saw record low turnout at the Democratic primary due to President Obama running uncontested, but in 2008, 532,151 ballots were cast in the Democratic presidential primary.

For 2016, Republican primary voters had already returned 25,172 absentee ballots as of Tuesday, Politico reported. In 2012, a total of 27,739 absentee ballots were recorded during the party's primary.

South Carolina's significant numbers of evangelical and conservative voters are continuing to throw their support behind Trump in the final days before Saturday's Republican primary. The business mogul has a significant two-digit lead on Cruz in four major polls of the state. It’s not clear if Cruz’s ability to draw first-time voters to the polls will be enough to help the conservative overcome Trump, who's fiery rhetoric has also drawn an enthusiastic support base.

Although it's expected South Carolina's Republican primary will see spikes in voter turnout similar to Iowa and New Hampshire, it's unclear if Democrats will be able to draw similar record-breaking voter turnout in the traditionally red state. No matter how many residents show up to vote, the Southern state's turn at the polls will undoubtedly shake up the GOP's ballot and provide some insight into how the Democratic candidates are polling with African-American voters.