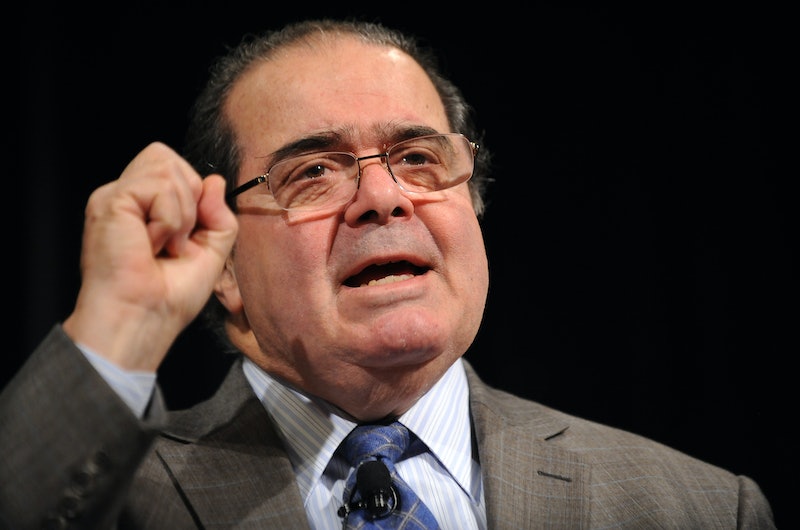 The sudden death of Antonin Scalia is nothing less than a monumental political development, and how the three branches of government respond to it will have deep, far-reaching implications for the continued functioning of the American government. It's far too soon to say exactly how this will play out, but early statements from Democratic and Republican leaders in Washington raise the concerning possibility that Scalia's death could lead to a constitutional crisis.

The concept of a constitutional crisis is somewhat vague, but in general, the term refers to a deadlocked political conflict that can't be solved through constitutional provisions. It's happened several times in America. Examples include the first time a president died in office, the secession of southern states before the Civil War, and the disputed election of 1876. In addition, Richard Nixon's firing of special prosecutor Archibald Cox during the Watergate scandal and the 2000 presidential election have also been cited as examples of constitutional crises. Another one may soon be on the horizon.

Shortly after Scalia died, Senate Majority Leader Mitch McConnell announced that he won't let the Senate confirm any Supreme Court nominees until a new president is sworn into office, a sentiment supported by Ted Cruz, Donald Trump, and other leading Republican candidates for president. In other words, the GOP won't let President Obama appoint a justice to fill Scalia's seat — even though he's president for the next 11 months and has a constitutional responsibility to appoint a new justice.

Soon thereafter, Obama announced that he would go ahead and appoint a new justice anyway, despite McConnell's pledge. Because the Senate must confirm all Supreme Court nominees, however, this has resulted in a situation where the U.S. will potentially have a vacant seat on the Supreme Court for the next year.

To be entirely clear, there is absolutely no substantive reason why the GOP should be blocking any and all SCOTUS nominees until the next election. The only justification for McConnell's decision is the simple fact that Republicans don't want Scalia to be replaced with a liberal justice. That is all.

McConnell and other Republicans have tried to justify their stance on the grounds the next election will give voters "a voice in the selection of their next Supreme Court justice," but this is, of course, nonsense. Voters already had a voice in the selection of the next justice — the 2012 election, which resulted in Obama being reelected as president for another four years. Not, as McConnell's actions suggest, another three years.

What's more worrisome than that single empty seat, however, is the dangerous precedent that McConnell is setting for future SCOTUS appointments. Despite what some Republicans are insisting, it is not "standard practice" for the Senate to refuse to confirm Supreme Court justices in an election year. In 1988, the Senate confirmed Anthony Kennedy to the Supreme Court by an overwhelming margin, so it's not as if this situation hasn't arisen before.

But the Republican position on this is new. Note that McConnell didn't even wait until Obama had named a new justice. He just stated flatly, within hours of Scalia's death, that Republicans would oppose any and all of Obama's appointments to the Supreme Court. The reasoning, again, comes down to the simple fact that Republican might win the White House in the next election and appoint a more conservative justice, and Republicans don't want to give up that opportunity.

If this is now considered sufficient grounds to block any SCOTUS nominee, what's to stop the Republican Senate from blocking any nominees that come from a Democratic president? It's not as absurd as it sounds. They could simply claim that they don't want to confirm a nominee who doesn't have "bipartisan support," all while refusing, themselves, to provide that support. Jeb Bush hinted at this thinking when he said at Saturday's debate that the Senate should reject anyone who's not "a mainstream nominee."

Furthermore, what's to prevent any future Senate from opposing all SCOTUS nominees that come from a president of the opposite party? As Jonathan Chait wrote eloquently in New York, "The notion that the Senate needs to let the president appoint somebody to a vacant Supreme Court seat is nothing but a social norm, and social norms in modern politics have a short lifespan." Ten years ago, for example, it would be unheard of for the Senate to shut down the government in order to oppose a years-old health care law it didn't like.

It may not get to this point, of course. Personally, I think the optics of a GOP Senate opposing a SCOTUS nominee for a year straight — and holding up all other Senate business in the process — would make the party look spectacularly terrible in an election year, especially if Obama nominates a moderate justice. Still, we are in uncharted waters here, and the continued functioning of America's judicial branch is no longer something anyone can take for granted.