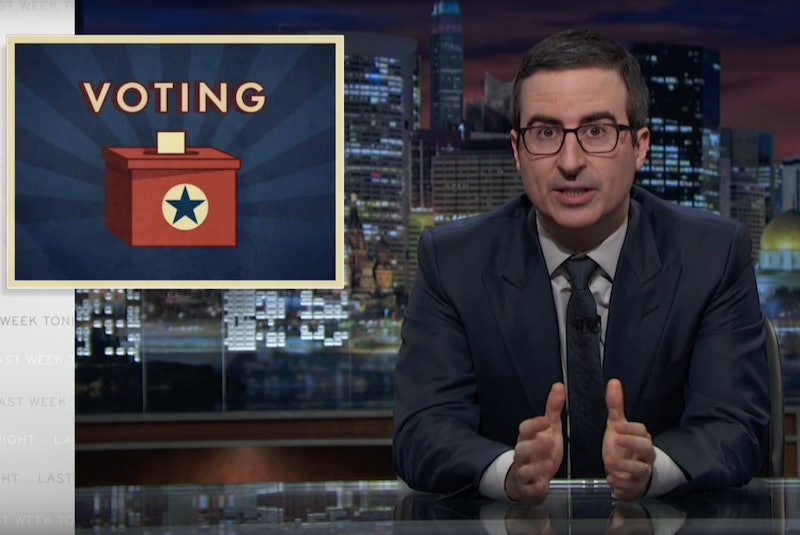 Last September, John Oliver hilariously told Stephen Colbert that he "couldn't give less than a shit" about the presidential election because "I don't care until we're in the same year as the thing I'm supposed to care about." Well, it's now 2016, and with Last Week Tonight returning Sunday, what better way to kick off Oliver's Season 3 premiere than to tackle voting rights.

Voting rights have been a contentious issue for years, and with an increasingly crucial election coming up in November, it's never been more clear that every vote counts. But as voter ID laws sprout across the country, including in South Carolina which will host the next primaries on Saturday, these legal obstacles can be confusing and often prevent people, many of whom belong to socioeconomically disadvantaged minority communities, from having acceptable forms of identification to vote. From cryptic hours like at the ID office in Sauk City, Wisconsin, where its doors are open only on the fifth Wednesday of a month, to ridiculous amounts of required paperwork, more and more people are being shut away from the ballot box.

While proponents claim these laws are designed to prevent voter fraud, Oliver argues that this incidences are rare and ultimately minuscule in the big picture of things. And, as it turns out, some legislators fighting to put these restrictive voter laws in place might be guilty of committing a little voter fraud themselves. Check out the full video below.