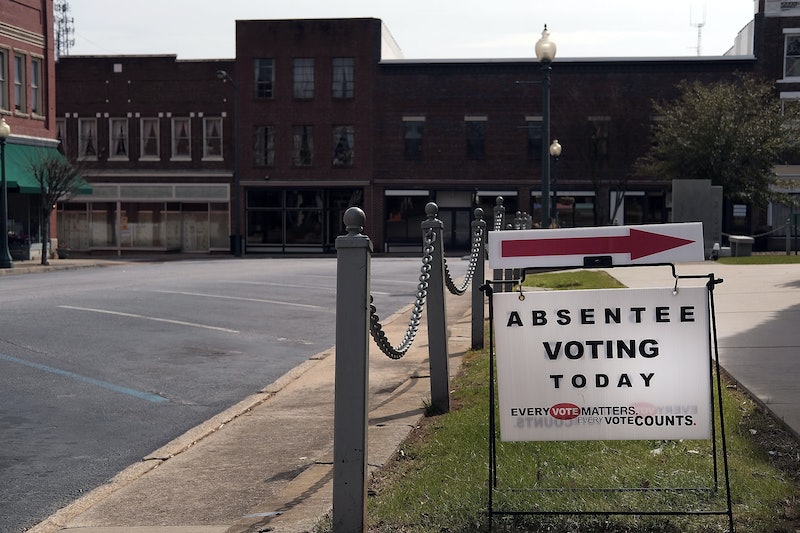 Palmetto State Republicans will head to the polls on Saturday for the first open primary of the GOP contest this year. In South Carolina, polls will open at 7 a.m. ET and close at 7 p.m. ET. Voters will decide which of the remaining six Republican candidates they would prefer to represent them at the upcoming national convention, slated to be held in Cleveland, Ohio, this summer. Currently, Donald Trump is maintaining a commanding lead among likely voters, with Huffington Post's polling aggregator reporting that Trump is projected to capture 38 percent of the vote, while Sen. Ted Cruz is projected to capture roughly 21 percent.

Qualified Republican voters who will be outside of their precinct or unable to get to the polls will be able to turn in their absentee mail ballots until Saturday at the county elections office by 7 p.m. on the day of the primary, or by mail as long as the postmark was before 5 p.m. on Tuesday, Feb. 16. Absentee voting is allowed in person up until Friday at 5 p.m. at your county election office. The South Carolina State Election Commission reported that as of Feb. 3, 29,000 absentee ballots had been requested. As both primaries are open, it is impossible to currently tell who is leading in the official count without official returns from the state.

South Carolina Democrats will have to wait a week later to get out to the polls. Voting for the Democratic primary goes from 7 a.m. to 7 p.m. on Saturday, Feb. 27. Absentee voting and voting by mail will be subject to a similar timeline, just a week later. Having two separate primary election days instead of just one might seem like an unnecessary complication to the outside observer. However, since every state has different electoral procedures and infrastructure systems, sometimes it just isn't logistically possible to run two different elections simultaneously, given the resources locally, or statewide.

Regardless if you are in the state or observing from afar, coverage will organically begin on social media as voters begin to arrive at polling stations and post photos with their "I voted" stickers on their timelines. Local and national media coverage will start to filter in as polling stations open as well. Expect cable channels to switch to exclusive coverage at around 6 p.m. or so, about an hour before polls close. Just like in Iowa and New Hampshire, some precincts will process their votes faster than others, so depending on turnout levels and staffing, it may take some time before a candidate emerges triumphant.

Out of the remaining six contenders for the Republican nomination, Ben Carson is currently in the weakest position in South Carolina. Aggregated polling from Huffington Post shows his support at 5.3 percent after peaking as a front-runner around Thanksgiving and capturing 28 percent in a poll from Monmouth University; a recent live phone poll from this weekend conducted by ARG showed Carson nabbing only 3 percent of the vote. Undecideds fared far better at 8 percent. After being bypassed by Gov. John Kasich's moderately surprising rise in the aggregate polls for South Carolina, a poor result in the state may spell the end for the languorous surgeon's candidacy.

The South Carolina Democratic primary may be Hillary Clinton's first chance to score a definitive win in her struggle to lock down her party's nomination. Currently, state-level aggregated polling from Huffington Post shows the former senator from New York maintaining a nearly two-to-one advantage over Bernie Sanders. However, with only 10 days to go until South Carolina Democrats vote, a close look at the state-level polling from this year reveals that the Sanders campaign has been losing ground among the Democratic likely voters being polled.

These polls are all conducted by surveying registered Democratic voters who are likely to turn out for the election — however the polling firm makes that determination. Watch the returns in South Carolina carefully on Feb. 27. If Clinton fails to best Sanders by a significant margin, it would indicate that perhaps the Sanders campaign has more crossover appeal to Republicans and disenchanted voters of all stripes than anyone in the Democratic establishment would like to admit.