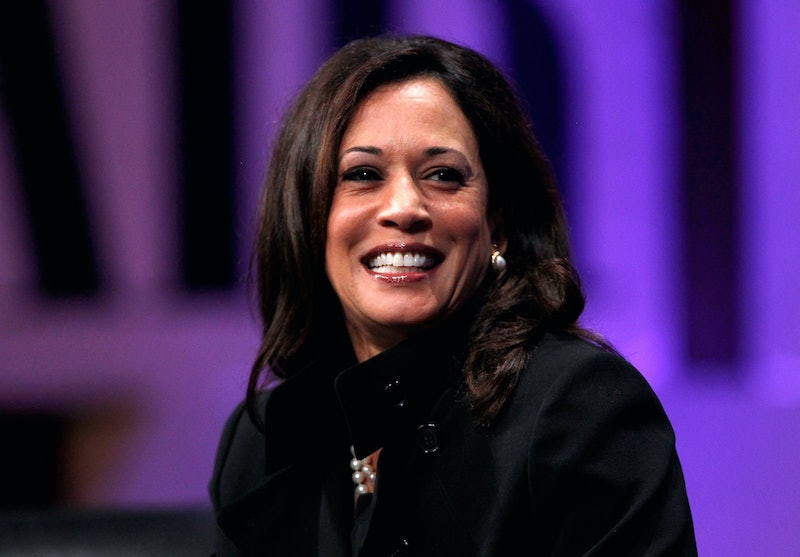 Within hours of the news that Supreme Court Justice Antonin Scalia had died on Saturday, pundits and politicians began speculating about who would fill his spot. Over the weekend, names of possible replacements began circulating. While Sri Srinivasan and Cory Booker have been floated as choices, one woman in the running to fill Scalia's Supreme Court seat is Kamala Harris.

While Harris does not exactly have household recognition, the Democrat has made quite a name for herself as California's attorney general. The 51-year-old has held the position since 2011. Not only is she the first woman to hold the post in the state, but she is also the first African-American and the first Asian-American to do so. She also garnered national attention as the subject of one of Barack Obama's few major presidential gaffes. At a fundraiser in San Francisco in 2013, Obama referred to Harris as "the best-looking attorney general." The president earned some heat, and sparked a debate over whether such a comment was sexist. The jury is still out on that one.

While she has taken on a diverse array of cases, perhaps the most notable part of Harris' career is her time as attorney general cracking down on Internet trolls and online harassment. Under her lead, California convicted Kevin Christopher Bollaert, the operator of a revenge porn website, and sentenced him to 18 years in prison last year. According to California's Department of Justice, it was the first time anywhere in the country that someone was criminally prosecuted for running a cyber-exploitation website. Harris has also advocated for increased police training on new technology and social media, so law enforcement can better recognize and respond to harassment. In 2015, Harris gathered 50 tech companies (including Twitter and Facebook) and law enforcement representatives to discuss issues of cyber exploitation, and launched a website to combat online harassment and support victims.

Currently, Harris is running for Barbara Boxer's Senate seat. (Boxer is retiring when her term ends in 2017.) Running as a Democrat, her campaign is largely based on her extensive law career and her commitment to criminal justice. In her official announcement of her U.S. Senate run, Harris stated:

I will be a fighter for middle class families who are feeling the pinch of stagnant wages and diminishing opportunity. I will be a fighter for our children who deserve a world-class education, and for students burdened by predatory lenders and skyrocketing tuition. And I will fight relentlessly to protect our coast, our immigrant communities, and our seniors.

In 2009, Harris published Smart on Crime: A Career Prosecutor's Plan to Make Us Safer, in which she proposed new approaches to fighting crime. "As a career prosecutor, I believe that nothing is more important than how we choose to keep ourselves, our families, and each other safe," the preface of her book states. "Unfortunately, there are substantial gaps and flaws in the ways we handle crime today."

Obama is expected to announce a Supreme Court nominee after the Senate returns from a recess next week. Harris could be the chosen one — and a historic first for the highest court in the land.