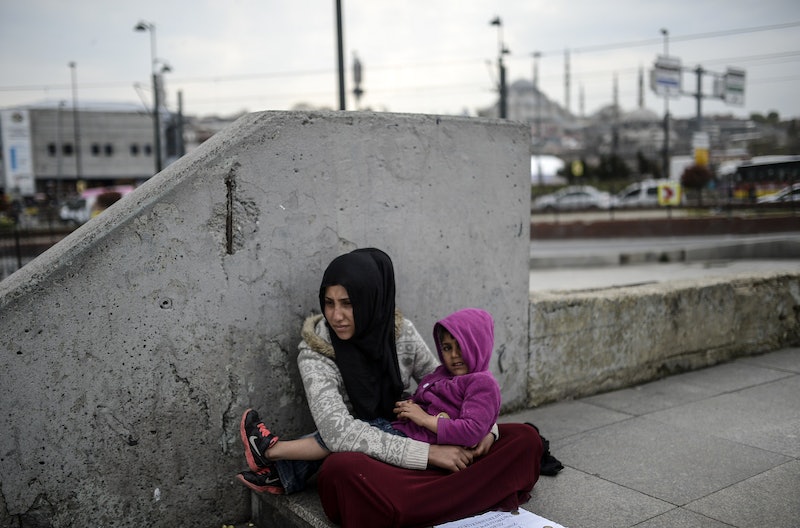 As the Syrian Civil War enters its fifth year, more than 4.7 million Syrians have fled the embattled country to Lebanon, Iraq, Jordan, Egypt, and Turkey, and four out of five refugees are women and children, the United Nations estimates. The conflict in Syria has brought new hardships and daunting challenges to the country's female refugee population, a quarter of whom now head households, a study by the U.N. High Commissioner for Refugees reports. As these women struggle to provide and care for their families away from familiar communities and traditional sources of support, there are organizations working to empower Syrian refugee women to provide for their families. The Olive Tree Women's Craft Collective run by Small Projects Istanbul is one such group working toward providing Syrian women in Turkey's largest city with the skills, training, and livelihood support they need to rebuild their lives.

Small Projects Istanbul first launched its craft collective as a pilot program in October 2015 to give Syrian refugee women visiting the non-profit's community center — who don't legally have the right to work in Turkey — some means of livelihood support. Since its launch, the collective has partnered with multiple businesses, including Grand Bazaar Jewelers and the urban tote-bag brand TWELV12, so Syrian women can earn a supplemental income in exchange for artisanal handicraft work. But this circle of empowerment isn't complete without you (and trust me when I say, you'll want to buy what these women make).

"While the primary aim of the collective was to provide livelihood support to these families who struggle to cover the basic expenses of food, rent, and schooling for their children, we have seen many other valuable aspects grow out of it," Small Projects Istanbul's Communications Manager Anna Tuson tells Bustle in an interview. "The women take pride in participating in something productive and contributing to their families wellbeing in such a definitive way. For many, it’s the first time they’ve worked outside of their homes."

These women hail from all over Syria with a range of educational and professional backgrounds, but they share a need to provide for their families. Some, like Sausan, who fled Damascus for Istanbul six months ago, need income to cover the cost of rent and food for her and her son. For others like Zeina, whose husband underwent open-heart surgery and cannot work, the money is key to her family's survival. For Reem, who escaped the heavily besieged town of Zabdani in southwest Syria, the wages pay school fees so her children can continue their education and have a chance at a better life. "I lost my country and I don’t want to lose my children’s future as well," she says.

Although the craft collective has been up and running for less than a year, the project has already shown to have an impact far beyond income-earning opportunities. The Olive Tree Women's Craft Collective provides Syrian women with a safe and supportive community, a therapeutic place to gather strength and connect with women in similar situations. Perhaps the most significant benefit of the collective is how it empowers women whose lives have been embedded with fear and uncertainty due to the Syrian conflict.

"Where they would otherwise sit at home, feeling isolated, stressed, bored and depressed, having something purposeful to do helps alleviate those feelings," Tuson says. "The craft collective is a very warm place of laughter and support, and sometimes tears, where friendships are built and stories shared."

Participants are signed up and screened by Small Projects Istanbul so their production work and output can be monitored, which ensures that fair wages make it into the women's pockets. Because of the work restrictions placed on refugees, the women are paid in the form of food vouchers. In partnership with Grand Bazaar Jewelers, the collective's Syrian women were trained in handicraft skills like macramé and now manufacture a bracelet collection specially designed by the company's founder Nurhan Gumusmakas. After the cost of materials, all the proceeds from the bracelets — which are available for sale worldwide here — go straight to the Syrian women who produced them.

For Yasemin Zamanpur, founder and designer of the ecologically and socially conscious brand TWELV12, working with the women of the craft collective was a no-brainer. TWELV12 produces organic cotton canvas tote bags, drawstring bags, pouches, and pillows all with edgy and original patterns Zamanpur draws as a form of meditation. With the importance of participating in social outreach instilled in her at a young age, Zamanpur says she was driven to make her business one that gave back.

"The refugee crisis is not a conflict we read about in the news but one that has become deeply embedded into our everyday lives in Istanbul as we cross paths with those who have been displaced by the Syrian conflict on a daily basis," Zamanpur tells Bustle. "I decided that I wanted to help alleviate the burden of these unfortunate families."

A month before launching TWELV12 Zamanpur approached Small Projects Istanbul about facilitating a partnership. "You know that saying about teaching a man how to fish? That’s what inspired the idea of involving these women in the process of generating an income," Zamanpur says. A team of four Syrian women from the collective currently produce all of TWELV12's accessories pouches, which you can buy online from anywhere in the world. Excluding the cost of materials, all proceeds from pouch sales go to the women.

But Zamanpur is quick to stress she doesn't look at the women of the craft collective as charity cases. "These women are my partners in business," she says. "They have skills and are open to learning new skills that can help build successful partnerships."

"The best thing we can do is not approach these women as victims but treat them like the capable and dignified individuals that they are."

Like many organizations attempting to address the impacts of the Syrian crisis, Small Projects Istanbul is short on funding but big on need. Currently, the craft collective is capped with 45 women and is raising funds to expand their production space by moving to a bigger building. "We can only pay in line with how much we’re able to sell... so unfortunately, we’re not able to take on any more [women] at this time although we know the desire and need is there," Tuson says. Even Zamanpour is keeping her fingers crossed the collective is able to find more room, saying she hopes to increase both the number of women working with her and the range of TWELV12 products they make when space allows.

You can help them grow with a donation made to their Indiegogo campaign or directly through their website.

For many refugee women, life from the Syrian Civil War has become a battle for survival as they fight to maintain their dignity while struggling to provide for their family's most basic needs. While one in five refugee women are successfully able to find paid work, they often come under the threat of exploitation, sexual harassment, and verbal or violent attacks, the U.N. reports. The ability for any woman to not just survive, but thrive, should not come at the cost of humiliation. The tireless efforts of organizations like Small Projects Istanbul are vital not only because they enable Syrian refugee women to put bread on the table, but because they also leave them empowered to rebuild their lives.