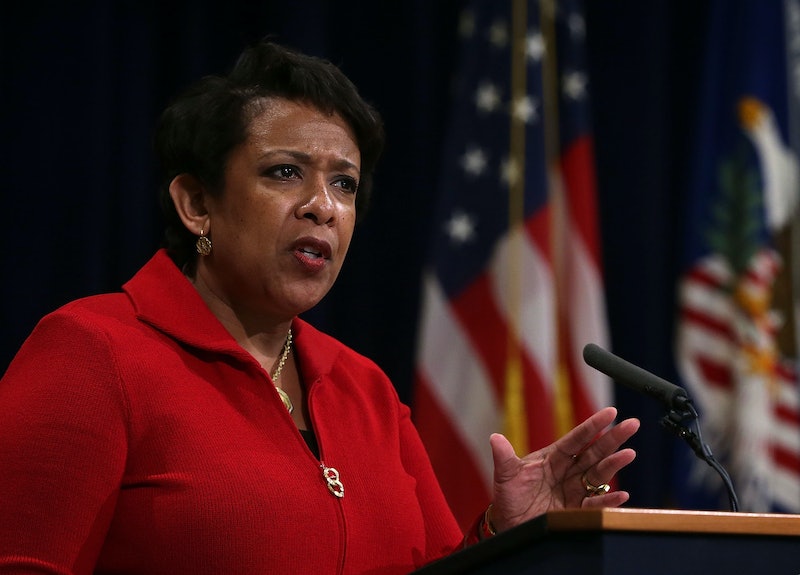 Things are more tense between Democrats and Republicans than they've been in a while since the unexpected passing of Supreme Court Justice Antonin Scalia on Feb. 13. Senate Republicans are already planning for a potential filibuster to President Obama's nomination to replace Scalia, even though he hasn't actually nominated anybody yet. However, there is some conversation surrounding whom he might nominate, and of those names is that of Attorney General Loretta Lynch. Would Obama select Lynch as his nominee for the Scalia vacancy? Possibly, possibly not, though she is a superior candidate for the position, and very highly qualified.

Some, like Tom Goldstein of SCOTUSblog, argue that the president will nominate the current attorney general for the position. He suggests that Senate Republicans will eventually — after some delay — permit the nomination to proceed on merits, but then reject it on party lines. In other words, knowing the SCOTUS balance is likely to shift left, Senate Republicans may slow the procedure so that when the end of Obama's second term nears, they can ultimately reject Lynch and claim that it is too close to Obama's lame duck period (that awkward time between the 2016 presidential election and inauguration of the next president) for him to make the call.

That tactic may make sense to Senate Republicans because it would try to sidestep ideas — at least as far as the political right is concerned — that they might blatantly oppose Lynch because of her race (she's African-American) or her progressive political leanings, and the president's imminent lame duck period could instead conceal any potential objections.

Lynch does, however, adequately fit the requirements for the position. And as a 56-year-old African-American women, she would provide a point of contrast with Justice Clarence Thomas, a conservative African-American man. She's a definite candidate to change the ideological balance of the Court.

Dozens of potential nominees, like Danielle Gray (a lawyer from the Obama Administration who helped construct the Affordable Care Act), Avril Haines (a lawyer and Deputy National Security Advisor), Paul Watford (a Los Angeles federal prosecutor who clerked for Supreme Court Justice Ruth Bader Ginsburg), and Sri Srinivasan (a moderate who clerked for Supreme Court Justice Sandra Day O'Connor), among others, are suited for the position, but Lynch seems one of the most likely because. Among other qualities, she's highly qualified, well-regarded, and she does not have the polarizing reputation of the last attorney general, Eric Holder.

Her candidacy for the SCOTUS position is therefore elevated due to her prominent role as attorney general and her clean status within it. Unfortunately, any attempt by President Obama to fill Scalia's position is going to meet strong opposition, unless the political dynamic in the country forces Senate Republicans to alter their stance and allow the nomination to move forward.

Who knew an abrupt incident like a death could cause such a disturbance within the political status quo? Well, this isn't the first time Senate Republicans have spoken of filibustering President Obama's SCOTUS nominee — it's actually the third — and no matter whom he chooses, it's going to turn into a political stalemate. Whether Lynch's name gets thrown into the mix is something only time will reveal.