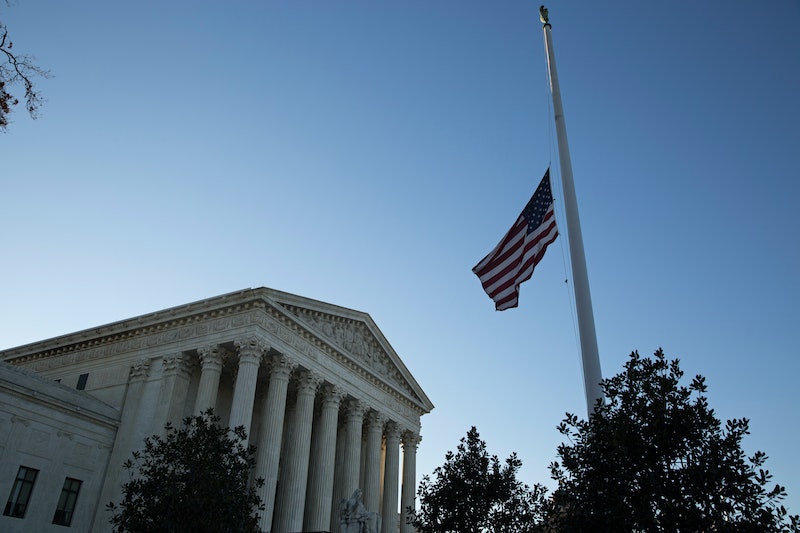 It’s now quite possible that the Supreme Court will only have eight justices for the next 11 months, because Senate Republicans have said that they’ll block consideration of any new nominees until the next president is sworn into office. This means that we could have a whole lot of 4-4 split decisions until the court’s next term. What happens when the Supreme Court ties, and what does this mean for the fate of this year’s cases?

When SCOTUS hands down a split decision, the lower court's ruling on the same case stands. So let's say the DC Circuit Court decides that Obama’s climate change initiatives are legal. Someone issues an appeal, the Supreme Court takes up the case, and it arrives at a 4-4 tie. In that situation, the DC Circuit Court’s ruling would stand, and Obama’s climate initiatives would survive. Simple! Right?

Well no, not so simple. One of the reasons the Supreme Court is so important is that its rulings have the potential to set nationwide precedents. The court’s landmark ruling in Obergefell v. Hodges, for example, didn’t simply legalize marriage equality in one or two states. It legalized marriage equality everywhere, in every state and jurisdiction across the country.

When the court ties, however, this doesn’t happen. The lower court decision is upheld, but that decision applies to whatever jurisdiction that specific lower court has, not the whole country. The long and short of it is that with only eight members, the Supreme Court is far less likely to hand down sweeping decisions that affect the entire country. However, what exactly this means differs wildly from case to case.

Take Whole Women’s Health v. Hellerstedt, for example. In that case, abortion rights groups challenged a 2013 law in Texas that severely limited abortion access in the state. That case was last decided by the 5th Circuit Court of Appeals, which largely upheld Texas’s restrictions, and it’s now in front of the Supreme Court.

But if SCOTUS reaches a 4-4 tie, the 5th Circuit Court’s ruling on Texas’s abortion law will stand. This would mean that the anti-abortion law stays on the books in the state. However! The ruling would only apply to Texas, Louisiana, and Mississippi (the 5th Circuit Court’s jurisdiction). It wouldn’t set a precedent for the whole country, and thus would not impede pro-choicers from challenging similar anti-abortion laws in other states. By contrast, a 5-4 ruling in favor of the law would have essentially rendered Texas-style restrictions legal across the country.

While the precise implications of a tie differ from case to case, Scalia’s absence is a good thing for progressives across the board, simply because he almost always voted with the conservative bloc of justices. That bloc now has one fewer vote, so cases that would have ended in 5-4 conservative rulings will now, at least in theory, end up as 4-4 ties — thus avoiding setting a nationwide precedent of conservative decisions.

All of this could will have enormous implications, because the court was expected to hand down conservative rulings on several very important cases. One of Obama’s biggest environmental initiatives will likely be saved by a 4-4 tie, for example, as will the Affordable Care Act’s contraceptive mandate. A lawsuit that would have dealt a severe blow to public sector unions will probably wither and die, and while Obama’s executive actions on immigration are still at risk of being struck down, their chances of survival just shot up significantly.

Senate Republicans may yet prevent Obama from appointing another SCOTUS justice. While that probably seems unfair to a whole lot of liberals, given that Obama still has 11 months left in his term, an extended vacancy on the court is actually a huge boon to the American left at the moment, as it puts the kibosh on what probably would have been a slew of conservative rulings. When conservative radio host Mark Levin called Scalia’s death “an absolute disaster” for conservatism, he wasn’t kidding.