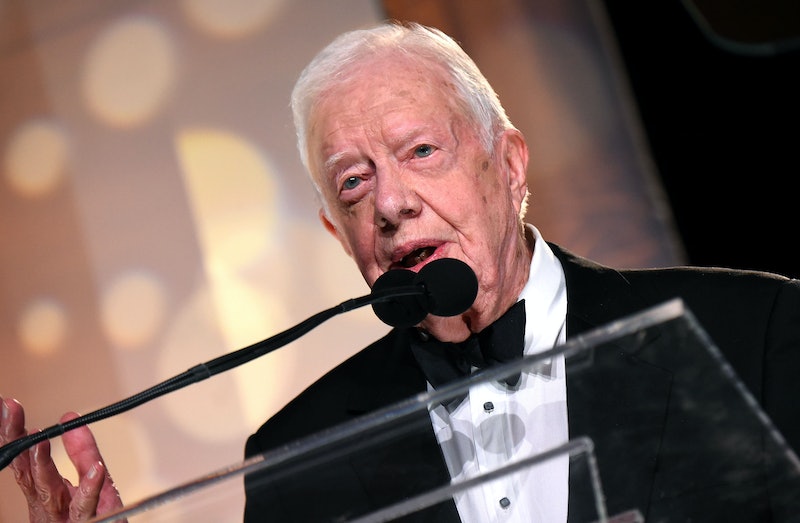 The likes of Grammy Award winners such as Beyoncé are now in some pretty good company — during Monday night's top music award show, former President Jimmy Carter took home the coveted gramophone trophy for Best Spoken Music Album for an audio version of his memoir, A Full Life: Reflections at 90. President Carter snagged the Grammy over nominees like comedian Amy Poehler and singer Patti Smith. This is the president's second time receiving the award, with his first win given to him in 2007 for another audio memoir. And with this additional accolade under his belt, President Carter again shows that he's not letting his cancer diagnosis get the best of him.

Since Carter's August 2015 melanoma diagnosis, the former president hasn't been slowing down. Though he's been undergoing radiation and immunotherapy treatment to combat the disease's spread to his liver and brain, Carter has still been largely active in his regular humanitarian efforts that he's taken on since the end of his presidency. His now award-winning A Full Life: Reflections at 90discusses some of these passions, including his fight for global women's rights and disease prevention.

One such fight Carter's been waging against disease has seen its final push since his 2015 cancer diagnosis. He and his Atlanta-based nonprofit The Carter Center have been working to eradicate the tropical disease Guinea worm since the '80s. Carter and his organization have seen this become a practical reality this past year, with only 22 known cases in existence worldwide. Despite primarily flying under the radar until the Carter Center began its research, the disease once ravaged many African nations until quite recently — the number of cases has decreased by a full 83 percent during 2015 alone. The former president even visited the House of Lords in the United Kingdom in early February to discuss the radical reductions in the cases of the illness.

In addition to racking up the Grammys and traveling, Carter has still been teaching his regular Sunday school class in his hometown of Plains, Georgia, on a near weekly basis. The Sunday school classes have become a staple for the community, with the church reaching capacity almost every week. Both the former president and First Lady Rosalynn Carter even take photos with each family that visits the church.

Through his perseverance, Carter shows that illness does not always mean a person must also stop living. Whether it's picking up his second Grammy award or traveling the world, the former president is definitely an inspiration.