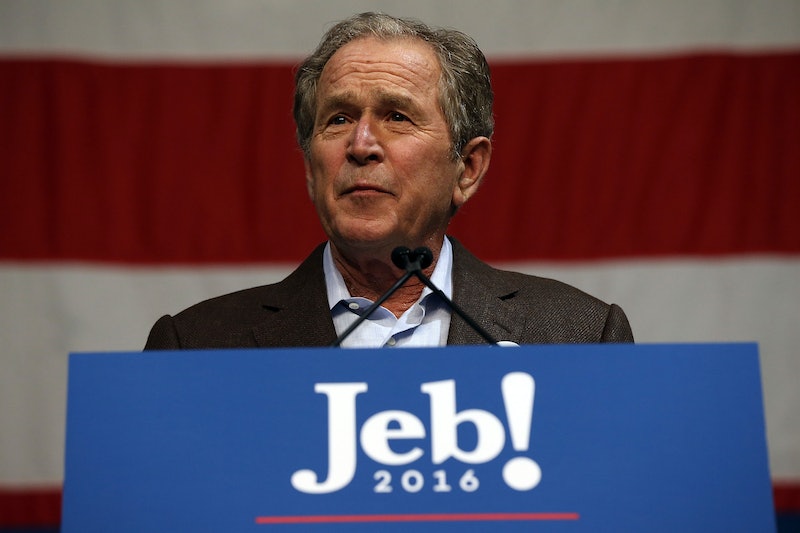 In an attempt to make himself relevant once again on the 2016 presidential campaign trail, candidate Jeb Bush brought the fire to South Carolina's GOP debate on Saturday, going after frontrunner Donald Trump like the former Florida governor had absolutely nothing to lose. And the last-ditch efforts to rescue the Jeb! 2016 campaign didn't stop there. Bush was able to swing a public endorsement by none other than his brother, former President George W. Bush, during a campaign rally in South Carolina on Monday evening. But can a Bush endorsement boost the Bush campaign? The former commander in chief just showed major love for his baby brother, pushing for a third — yes, third — Bush presidency.

An appearance by the former president is kind of a big deal, considering he's been out of the American spotlight for seven years and seems to like it enough that way. The older Bush brother couldn't have thought he could go the 2016 campaign unmentioned, though, and Saturday's GOP debate proved the good guess to be true. Among the many ugly exchanges between the business magnate and the former Florida governor was a confirmation by Trump that he would have been in favor of impeaching George W. Bush for alleged misdeeds prior to declaring war in Iraq.

"They lied. They said there were weapons of mass destruction, and there were none," Trump stated. And while Jeb made it clear that he was "sick and tired" of Trump going after the Bush family — can't forget that obligatory nod to Mama Bush, the strongest woman around — Americans have been missing out on other members of the Bush family reciprocating Jeb's very vocal love. That is, until now.

More than 1,000 supporters came to the North Charleston convention hall to hear both brothers of the Bush dynasty make pleas for a surge in support of Jeb's campaign.

With harsh accusations from Trump still fresh in the mind of debate participants and viewers alike, the older Bush did not shy from making comparisons between his younger sibling and the Republican frontrunner.

I understand that Americans are angry and frustrated, but we do not need someone in the Oval Office who mirrors and inflames our frustration. ... Strength is not empty rhetoric. It is not bluster. It is not theatrics. Real strength, strength of purpose, comes from integrity and character.

And despite George W.'s popularity among South Carolinians, the endorsement may be too late to provide the former Florida governor the necessary boost required to bring him a win in the state's Republican primary election on Saturday. In an average of the most recent South Carolina polls, Bush sits at 9.3 percent, even trailing behind the nearly-forgotten Ohio Governor John Kasich.