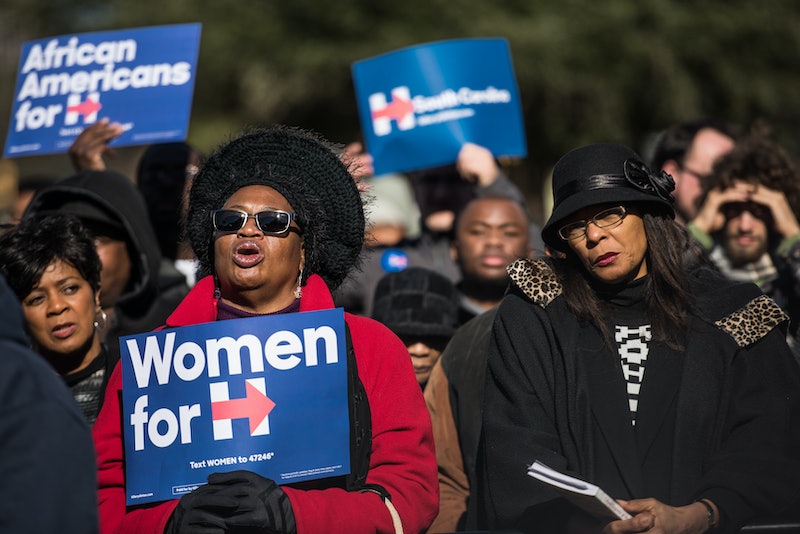 The South Carolina primaries are right around the corner, taking place on Feb. 20 for the GOP and Feb. 27 for the Democratic Party. The polls will be open from 7:00 a.m. to 7 p.m. ET on both dates. It's a big event for the presidential primaries because it's the first in the South, setting the stage for the rest of the states in the region. South Carolina also offers a total of 109 delegates for both parties — 50 for Republicans and 59 for Democrats.

Donald Trump currently leads the Republican polls in South Carolina with 36.3 percent of support, followed by Ted Cruz, Marco Rubio, John Kasich, Jeb Bush, and then Ben Carson. With the results of South Carolina's primary, you likely will see a few more candidates drop out of the race. Could this be the end for Carson? Will he leave early to finish up another load of laundry? Is it possible that Bush will suspend his campaign after Saturday? Jeb just received the endorsement of his brother, former president George W. Bush, which might actually help him with his campaigning in South Carolina, where W. won the state's republican primary in 2000. But we'll see what happens once the results are in.

On the Democratic side, Hillary Clinton is in the lead in South Carolina. With a margin of 24 points, she is polling at 59.5 percent, with Bernie Sanders following at 35.5 percent. But these candidates will first be headed to Nevada for their party's primaries on Feb. 20. Both candidates are trying to win the vote of South Carolina's black population. South Carolina's median age is 38.3, and nearly 28 percent of its residents are black. This will likely play a decisive role in which of the two candidates will win the state's primary, as Sanders has generally polled well with younger demographics — although both candidates have campaigned to gain the support of African American voters, with whom Clinton is currently in the lead.

The upcoming weeks in Nevada and South Carolina are sure to make big waves in the primaries for both parties. We'll likely see a few drop off on the Republican side, as well as the campaigns heating up even more on the Democratic side.