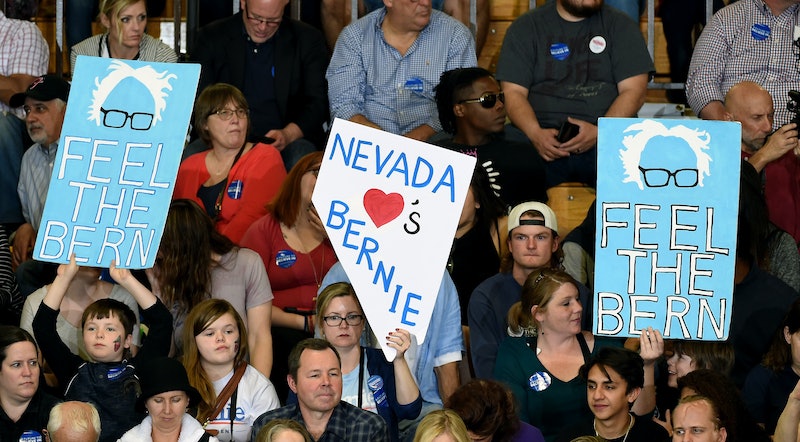 The presidential primaries are almost in full swing with the Southern states kicking off their voting in South Carolina on Saturday for Republicans — and the following Saturday on Feb. 27 for Democrats — and Nevada kicking it off for the West with Democratic caucuses also on Saturday and Republican caucuses on Tuesday. Both states' races are just around the corner and are important for different reasons, but are Nevada's caucuses winner-take-all for presidential candidates?

On the Democratic side, there are 43 total delegates to be won in Nevada, but it's not a typical primary. Of the 43 delegates, 35 are pledged and the remainder are superdelegates. The 35 delegates won't be distributed to either candidate until the Democratic National Convention in May. The remaining eight superdelegates will go to the convention as unpledged delegates and are not bound by caucus voting. Clinton currently has pledged support from three superdelegates, and Sanders from one, so Clinton is heading into Nevada with an edge. But ultimately, Nevada's Democratic caucus is not winner-take-all.

The Nevada GOP caucus takes place on Feb. 23. This caucus is much more straightforward in terms of how many delegates go to each candidate. There are a total of 30 delegates at stake for the GOP in Nevada and they are proportionally rewarded to each candidate, as long as they get 3.3 percent of the vote. On Feb. 23, candidates Donald Trump, John Kasich, Ted Cruz, Marco Rubio, Jeb Bush, and Ben Carson will be fighting for these delegates. Carson might not even make it to Nevada — on Feb. 20, South Carolina could be the end for Carson, who received only 2.3 percent of votes in New Hampshire.

The Wall Street Journal has recently reported on the lack of polling data in Nevada, making the voting results for the state pretty ambiguous as of now. And according to the Huffington Post's HuffPost Pollster data, which puts together a composite of all publicly available online polling data, it looks like Bernie Sanders and Hillary Clinton are tied in Nevada. There is even less information on GOP polling — the last poll taken in regards to Nevada Republican voters was in December.

Considering how close the results of Iowa's Democratic Caucus were (49.9 percent votes for Clinton, followed by Sanders' 49.6 percent), and Sanders' subsequent win in New Hampshire by a whopping 22-point margin, going into Nevada with very little polling data could be a tough blind spot for Clinton's campaign.

Sanders' success in both states has also gone far from unnoticed. A doctor and member of Muslims for Bernie named Zaffar Iqbal told the New York Times, “The white Americans have already shown the momentum in Iowa and New Hampshire. Now is the turn for Nevada to stand up.” Clinton won Nevada in 2008 over President Obama, which could give her an edge there. However, we all know how that election turned out, and so it's definitely not clear whether or not a Clinton win in Nevada in 2016 will mean a presidential nomination.

The caucus takes place on Saturday for Democrats and Tuesday for the GOP, and it's definitely going to be an important state for the 2016 presidential race regardless of who wins each caucus.