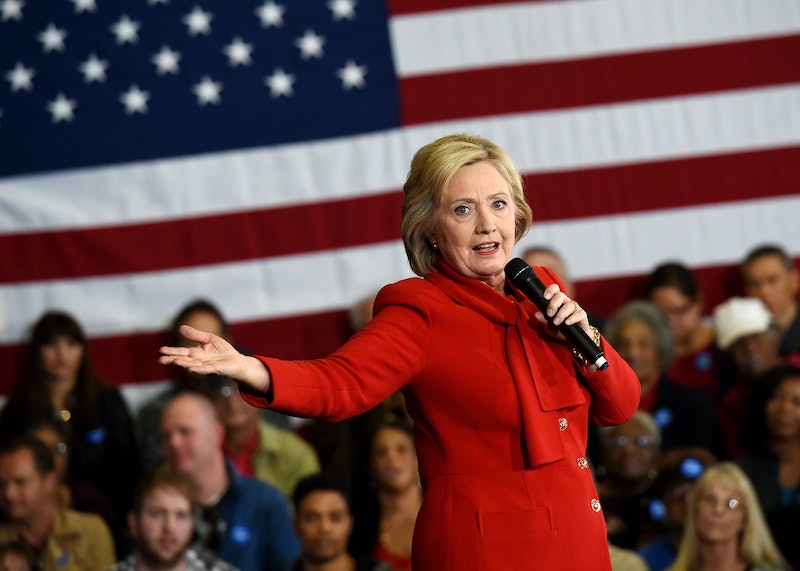 On Monday night, Hillary Clinton made headlines — no, not for being one of the most admired women of all time, nor for her policy proposals or her time spent as secretary of state or a senator from New York — but Hillary Clinton made headlines for barking. You see, she was at a campaign rally and she made a joke, and — instead of letting it go as just that — it became headline news. Would that have happened with any other candidate? All of whom at this point happen to be men, by the way? No, probably not.

Here's what happened. Clinton was at a campaign rally in Reno, Nevada, talking about regulation of Wall Street. She was expressing her surprise at Republican calls to repeal the Dodd-Frank law given the role unregulated financial trading had in the 2008 financial crisis and subsequent Great Recession.

And it reminded her of an old political ad from her days in Arkansas, one of her favorites. Clinton explained that the ad featured a dog that would bark every time a politician said something that wasn't true. She said people liked it so much they were "barking at each other for days" after it aired.

Then she said she'd like something similar now in 2016:

I'm trying to figure out how we can do that with Republicans. You know. We need to get that dog and follow them around and every time they say these things, like, "Oh, the great recession was caused by too much regulation" — arf, arf, arf, arf!

Now, to be fair, she did in fact bark like a dog, and her impression of a high-pitched lap dog was actually spot on. Maybe that is a bit unusual given the Democrats' penchant for expressing serious solutions to the nation's problems in comparison with the normal distractions from Republicans. But "Hillary Clinton attacks GOP by barking like a dog," as CBS News and other outlets (like CNN and ABC News) put it, seems wrong and plays into sexist attacks being made against the remaining woman running for president.

By making this instance into a full-blown news item, it gives her opponents leverage to use "barks like a dog" as a euphemism for "bitch." Clinton haters get to make their point without saying the word — and in doing so make it harder to counter. Lots of people like to attack her that way, among them Glenn Beck and Ted Nugent. There's even a Facebook group called "Hillary The Bitch" with the slogan, "Life's A Bitch — Don't Elect One!" Whoever her Republican opponent ends up being would have a lot more wiggle room referencing this news story than using the actual word.

In fact, if it's Trump, he already did, even before Clinton's barking joke on Monday. At a rally in New Hampshire last month, Trump heard something in the audience. "What was that — was that a dog?" Trump asked. A man shouted from the audience, "Hillary!" and then Trump repeated him. "Uh oh," Trump responded followed by a laugh and, "It's Hillary!" Mash-up memes have already hit the Internet.

The conservative news site Independent Journal Review challenged its followers on Vine to make their own mashups of the bark and hashtag them #hillarybarks. On Twitter, the video of Hillary barking has been combined with old footage of President Clinton, 2012 Republican presidential candidate Mitt Romney, and more. Written comments were even worse. One user tweeted, "@HillaryClinton impersonating a female dog? Not much of a stretch for her. #hillarybarks."

What starts as a bad editorial call in coverage opens a sinkhole of sexism and ends in a Vine of the former first lady in a Clifford the Big Red Dog mash-up. That doesn't further the conversation on how to solve the Syrian refugee crisis, explore how we can provide truly universal health coverage, or end discrimination against minorities. These are all issues that Clinton would like to debate the Republicans on — real problems that the GOP isn't working to solve. But if the conversation gets reduced to how she barks, she won't get to make her point. That would be a shame — not just for Hillary but for the country as a whole.