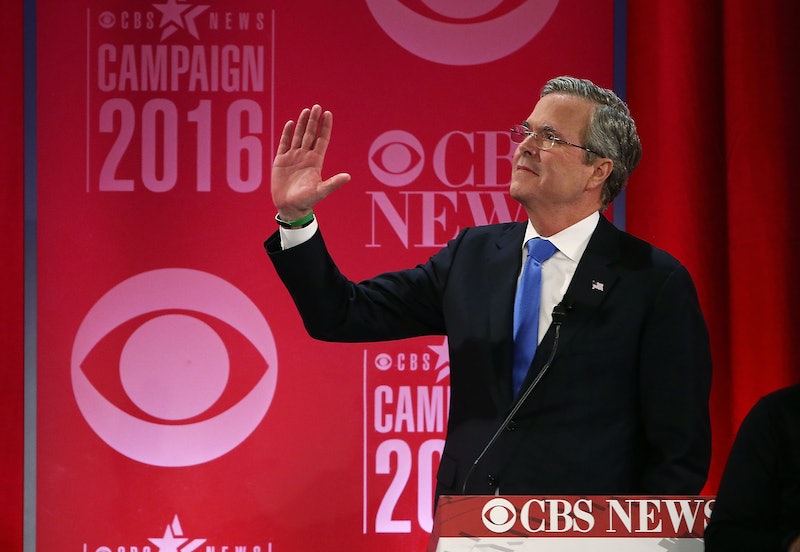 Though the Jeb(!) campaign hasn't fared well in the first two rounds of voting, it's refusing to back down. George W. Bush's little brother may not have pocketed the votes, but he certainly has something else on his side — that cash money. Over the past year, Jeb Bush's campaign raised over $155 million between the candidate's fundraising and his PACs, dwarfing closest GOP rival Ted Cruz who managed to raise a meager $89.9 million in comparison. Democratic candidate Hillary Clinton has the overall lead for fundraising, with over $163 million.

Bush had a little bit of a spending problem and a lot of donors aren't too pleased about it. As Michelle Conlin and Grant Smith reported in Reuters, ad-tracking firm SMG Delta calculated Bush's campaign and his Right to Rise Super PAC together spent $82 million on campaign ads, compared to Marco Rubio's $49 million or Ted Cruz's $11 million. One anonymous high-end donor expressed to Reuters his disappointment in these ad's efficacy (or lack thereof):

There is no return on investment on the Bush ad buys, zero.

As for transportation, Bush's campaign spent $1.2 million on private jets compared to Rubio's $293,300 or even Hillary Clinton's $700,000 — and that was just between June and September 2015. The Washington Post divided the Bush campaign's ad expenditures between September and December 2015 by the number of points he lost in the national polls. According to the calculations, he wasted $6.4 million for every point he dropped in the polls during that period. The Huffington Post followed suit and divided Bush's $14.1 million ad campaign expenditure in Iowa by the number of votes he received in the state. Based on what he spent to earn their support, Bush could have just given each of his Iowa voters $2,800, instead. Let's play this game with the total $155.6 million raised by his campaign. If Bush wasn't spending on his less-than-stellar campaign, what could he have done with those funds instead? Hindsight's always 20/20, Jeb(!).

Not just any Furbies — special collector's 1999 Furbies. Voters are capable of betraying you. Furbies are not... although their jibberish may haunt your dreams.

Seeing Earth from outer space should really put "value" into perspective. Become an astronaut for a day for just $250,000 per Virgin Galactic seat. With 622 passes, Bush could travel to space each day for over a year and a half. Maybe a new occupation is in his future.

Who needs airplanes when you can just zoom around solo with the Martin Jetpack? Unlike private jets, they cost a one-time payment of $155,000, plus fuel expenses. The downside is it can only stay in the air for about 30 minutes.

Come on now. Who doesn't want to go to Coachella? At $899 per VIP ticket, it's an investment to say the least, but a surefire way to make any 20-something very happy. He needs more millennial votes, doesn't he?

This '80s model Porsche, besides being one of the most expensive, is really snazzy. A top speed of 195 mph isn't too shabby, either. Now imagine if Bush set a warehouse of them on fire... because that's basically what he could afford to with all of his campaign funds.

At a starting price of $39,999 per person, this Oceania cruise will take you on a half-year long vacation around the globe. Should Bush call it quits, it may be hard to find solace after an unsuccessful run for the White House — but getting the opportunity to see 45 countries and visit five continents may ease the pain.

This is just amusing. Bush's fellow GOP candidate Donald Trump sold his New York City penthouse for over $21 million in August 2015. Bush could have housed his campaign in it and bought six replicas of it.

In case Bush isn't about the Big Apple concrete life, this island off the coast of Washington state goes for $18.5 million. He could purchase eight and effectively run his own country of sorts.

Kanye West's Yeezy Boost sneaks that go for a whopping $20,000 a pair. I don't know if they're worth it, but Bush could have several closets full of them.