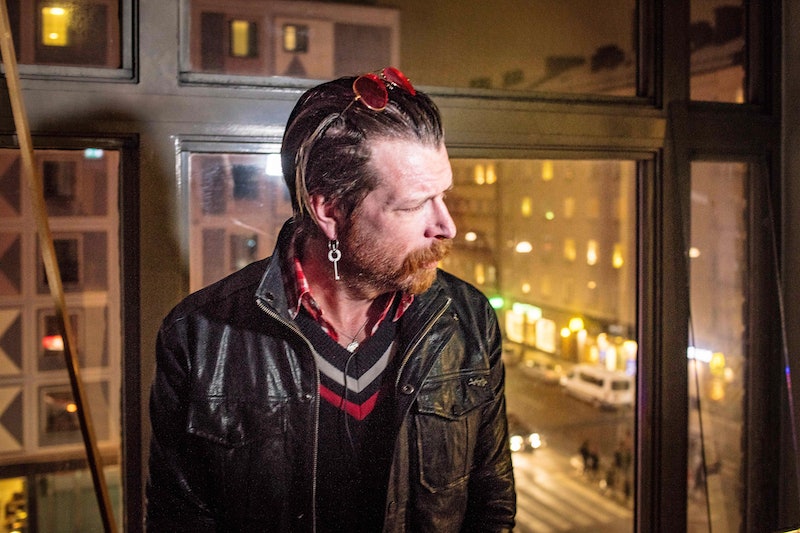 Three months after the horrific Paris attacks, Eagles of Death Metal frontman Jesse Hughes spoke out about the role of gun control in preventing terrorist attacks during an interview with France's iTele. Hughes, who co-founded the band alongside Queens of the Stone Age's Josh Homme, was playing a show at Paris' historic Bataclan theater when ISIS members opened gunfire in the concert hall and shot 89 people. According to Hughes, the attack wouldn't have been as deadly if concertgoers were allowed to carry firearms. Though his comments, out of context, may upset stricter gun control supporters, his unique perspective, as a man who witnessed an atrocity committed by firearms and is forever changed because of it, is invaluable in the gun control debate.

His denouncement of the efficacy of gun control laws isn't political, like it is for politicians attempting to appeal to conservative gun rights activists. However, gun ownership for Hughes, an avid NRA member, has always been personal.

Still, his words seem to go beyond any special interest he may have in expanding his rifle collection. During the interview, he spares no emotion and it's plain to see that his advocating for less strict gun laws stems from the undefinable moment he met true terrorism face-to-face. Forced into survival mode, the only alternative to escaping the scene would have been to shoot back and potentially save lives.

Hughes cried throughout the interview, explaining that there is no reference for what he is describing. When asked whether or not his views on gun control have changed since the concert, he passionately decried the relevancy of the topic.

Did your French gun control stop a single f*cking person from dying at the Bataclan? And if anyone can answer yes, I'd like to hear it, because I don't think so. I think the only thing that stopped it was some of the bravest men that I've ever seen in my life charging head-first into the face of death with their firearms.

According to news reports on the incident, no one inside of the concert venue was carrying guns but the terrorists.

Hughes isn't the only one who has publicly said the Paris attacks would have been less deadly if more civilians had been carrying guns. At a rally in Texas, Donald Trump expressed a similar opinion the day following the attacks.

When you look at Paris — you know the toughest gun laws in the world, Paris — nobody had guns but the bad guys. Nobody had guns. Nobody ... You can say what you want, but if they had guns, if our people had guns, if they were allowed to carry, it would've been a much, much different situation.

Incidentally, Hughes, in addition to being a prominent NRA member, is also a big Donald Trump supporter. In a 2015 film about Hughes, titled Redemption of the Devil, he referred to the second amendment as "good old-fashioned American fun." In one scene, while playfully brandishing rifles inside of his home, he explained his outlook on gun safety.

That taught me a big powerful lesson: It wasn't the guns that hurt me, it was bad behavior and the inability to be responsible for yourself. If it hadn't have been a gun it might've been a car, it might have been a fucking knife, or a baseball bat.

Though playing with firearms may trigger terrible flashbacks for Hughes now, his interview with iTele suggests that the Paris attacks have actually reinforced his prior views on gun ownership. According to Hughes, trustworthy people should be allowed to carry and use guns responsibly.

I know people will disagree with me, but it just seems like God made men and women, and that night, guns made them equal. And I hate it that it's that way. I think the only way that my mind has been changed is that maybe that until nobody has guns everybody has to have them.

His views may not have changed much, but his motivations for supporting the second amendment seem to have become less personal and are founded more heavily in the necessity to be able to defend one's self as well as others.

Because I've never seen anyone that's ever had one dead, and I want everyone to have access to them, and I saw people die that maybe could have lived, I don't know.

In a Feb. 13 interview with Agence France-Presse, Hughes said that, especially after the Paris attacks, he carries a gun everywhere to prepare for a similar case scenario.

I don't go anywhere in America without a gun anymore. That sucks. And I'm not paranoid. I'm not a cowboy... but I wanna be prepared.

On Tuesday, the band will be finishing its set at Paris' Olympia. In a November interview with Vice, Hughes emphasized the importance of returning to the stage fearlessly.

I cannot wait to get back to Paris. I want to play again. I was there when it went silent. Our friends went there to see rock 'n' roll and died. I want to go back there and live.

Hughes deems himself responsible enough to carry a gun and use it responsibly, even while occasionally under the influence, as he often is in his film. Similarly, there are likely plenty of concertgoers who, had they been carrying a weapon, could have counterattacked the terrorists during the show. But if there aren't gun control laws, how do we, at the most basic level, distinguish between the responsible individuals and the seemingly responsible or blatantly irresponsible individuals? The issue extends beyond this simplistic dichotomy as outside factors are taken into consideration. For example, there's a good chance that some concertgoers are under the influence of alcohol or drugs. Being in a crowded, loud environment doesn't lend any control or calmness to the environment either. Though Hughes' perspective is undoubtedly genuine, it's simply too trusting of the general population. Idealism by itself may fuel rock 'n roll, but good policies are created by mixing utopian ideals with unfortunate truths.