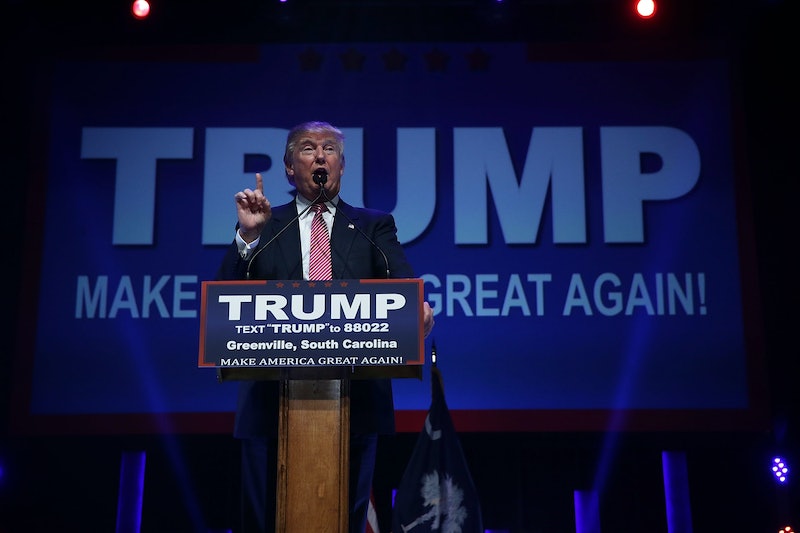 In yet another twist in this year's zany Republican primary race, Donald Trump is threatening to sue Ted Cruz on the basis of being a liar. During an interview with George Stephanopoulos on Good Morning America Monday morning, Trump stated that he is "very seriously" thinking about suing Cruz. "I've never dealt with anybody who lies like him." One might wonder if suing Cruz is the most effective use of Trump's time, with the Nevada and South Carolina primaries approaching and Super Tuesday right around the corner, but you might also be questioning the feasibility. Could Donald Trump really sue Ted Cruz?

Quite simply, Donald Trump can sue whomever he wants for just about anything. Trump could absolutely sue Cruz, which would be a downer on both their campaigns, but would definitely keep the media spotlight on Trump. The matter of winning a potential suit is less cut-and-dry, but it certainly would exhaust time and resources that Cruz can't afford to lose — he's lagging behind Trump, with Rubio hot on his tail.

Throughout all this talk about suing Cruz (which goes back at least until early January), Trump has been careful not to state a specific legal claim on which a lawsuit would be founded. It's a smart move on Trump's part — Cruz can't fire back in the media and avoid the potential lawsuit if he doesn't know exactly what the legal claim is. Trump has expressed outrage over Cruz's contested citizenship, which could indicate an actual claim on which to build a lawsuit. However, it might be a total waste of time: Legal experts have differed on the interpretation of the Constitution's stipulation for "natural born citizens," but most have now agreed that Cruz is eligible for the presidency. Just like Trump's investigation into Obama's citizenship, this latest incarnation of the birther movement probably won't stick.

Trump's other grievance with Cruz is a vague claim about lying, which again tends to lack specificity in interviews. But even specific instances of lying more than likely couldn't support a lawsuit, because unfortunately, it doesn't really matter if Cruz lies to voters. According to FactCheck.org, "candidates have a legal right to lie to voters just about as much as they want." It's rare for candidates to sue over false information, and even rarer for a candidate to sue another candidate, but if Trump did sue Cruz, it's questionable how far the suit could go before fizzling out.

Trump can sue Cruz, but should he? Signs point to no — it's a distraction from the politics, unlikely to achieve anything substantial, and a pretty underhanded tactic. However, the same could also be said of Trump's entire campaign, so there might be a lawsuit in the near future.