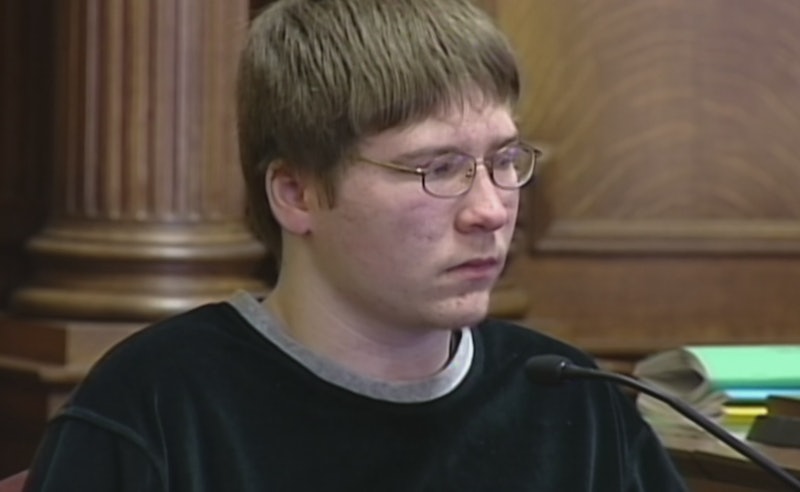 In the two months since Netflix's true crime documentary series Making a Murderer was released, the dual cases of Steven Avery and Brendan Dassey have drawn national attention. The former was imprisoned for murdering 25-year-old Teresa Halbach in 2006, and the latter, Avery's nephew, was also convicted and jailed for murder regarding the incident. And recently, one somewhat under-reported angle to Dassey's story is getting a fresh look — namely, some allegations he made against Avery. So, what's the story? Basically, Brendan Dassey made sexual abuse allegations against Steven Avery, but they do require some additional context.

Here's the situation: on the morning of March 1, 2006, nearly four months following Halbach's disappearance, Dassey was interviewed by investigators. It ended up being an hours-long, isolated interrogation, in which the teenager ultimately admitted to being involved in Halbach's murder. Some experts in false and coerced confessions (such as Steven Drizin, who spoke to Bustle about the phenomenon earlier this month) have condemned the police interview as coercive and misleading, although Manitowoc County maintains that the interrogation was by the book. Regardless, Dassey's state of mind seems highly relevant.

The 16-year-old's IQ was reportedly around 70, according to the docuseries, and when he finally spoke to his mother after the interview, he denied he'd told the truth, saying, "They got in my head." You can see the whole interview for yourself, which was uploaded to YouTube last year.

But here's the thing, and this did go somewhat overlooked by Making a Murderer — Dassey also alleged that Avery sexually abused him, telling investigators in May 2006 (not the video above, in other words) that Avery would sometimes grab him in a place that made him "uncomfortable," as Brian Flood noted for The Wrap. In a subsequent phone call that day with his mother Barbara, Dassey reportedly claimed that Avery would sometimes grope his penis through his pants.

It can't be overstated how dire any allegation of familial sexual abuse is, and taken in context, this is a charge that looks very bad for Avery. It's not the only such grisly claim he's faced, either: since the documentary's release, his ex-fiancee Jodi Stachowski has publicly recanted her past support, saying she now believes he killed Halbach, and alleging abuse at his hands. Avery has always maintained his innocence, adamantly denying the murder of Halbach and any abuse towards Stachowski, as well as any abuse towards Dassey.

In Dassey's case, however, there's some important context in the other direction to bear in mind, too. Namely, the fact that his initial reference to Avery's abuse came during a police interview, and as the footage that's publicly available attests, Dassey is pretty malleable when he's being grilled by investigators. That ended up being the cornerstone of his defense team's argument at trial — the claim Dassey had essentially made everything up to placate the investigators, who were aggressively guiding his statements. (That argument didn't sway the jury, who convicted Dassey.)

As Flood highlighted, an evaluation conducted eight months after Dassey's first interview, in November 2006, left psychologist Robert Gordon with a very different story — he told the court that Dassey denied any history of physical or sexual abuse. He also detailed how suggestible Dassey was, which is a crucial point in all this.

On this scale, the examinee is presented with a story about a crime and they are told that their memory is being assessed. After 45 minutes of time has elapsed, they are then requested to answer a series of leading questions. After they answer those questions, they are then informed that their answers were very poor, that they can certainly do better, and that they should try again and improve their score after the same questions are asked again. These two respective sets of 25 identical questions result in the Yield and Shift scores. In Brendan Dassey's case, his score were significantly elevated for both the Yield and Shift scores, again showing that he is significantly suggestible when presented with a situation that is comparable to a police interview regarding a crime scene.

For the record, Avery's attorney Kathleen Zellner — a wrongful conviction specialist who took on the 53-year-old's case in early January — responded to the claims in a statement to The Wrap, saying that Avery "categorically denies this unsubstantiated allegation."