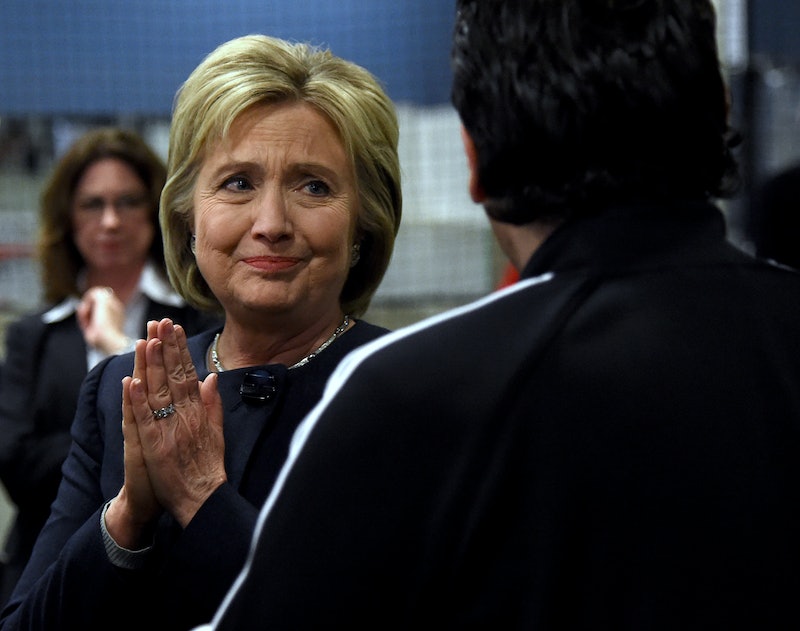 It may appear as though Hillary Clinton eats, sleeps, and dreams the presidency, but when you picture her having imaginary conversations with Eleanor Roosevelt — which she has — the dogged candidate may seem a little more relatable. Though she's intensely serious when it comes to winning that seat in the Oval Office, her personality off camera suggests Clinton can laugh at herself every once in a while. And heck, for someone who is constantly surrounded in scandal, finding ways to lighten up the mood is a must.

Take, for example, the famous pants suit. You may have perceived it as overtly professional — which it can be — but Clinton's been known to spice it up in her earlier days. In fact, she's been rocking the pants suit since she was a college student. In an interview with People magazine, a former classmate of Clinton's described her school dance outfit as "wonderfully outrageous."

It was floor-length culottes in a brilliant orange with feathers and bracelets.

She also proudly claimed to have outdrank John McCain in 2004 during a tour of Estonia. Her drink of choice: vodka. Those Hillary Clinton drinking memes are taking on a whole new meaning. Now that we've established Clinton can indeed poke fun at herself, here are some Clinton jokes even she couldn't resist.

Hillary Clinton and Bernie Sanders earlier tonight faced off in a debate on PBS, or as PBS calls it, "Antiques Roadshow."

To Goldman Sachs' booking Clinton for a speech: If you've got $675,000 lying around, don't book Hillary Clinton. For that much money you can get Kevin Hart. Have some fun, ride along.

President Obama tonight delivered his final State of the Union address. Now, we tape this show early, but I'm guessing he was interrupted dozens of times by applause and twice when Hillary Clinton tried to tag in.

Hillary Clinton complained about having to take selfies with voters, saying that it takes up too much time at campaign events. Yeah, good one, Hillary. That's the way to capture the youth vote — directly criticize their favorite thing in the whole world.

Hillary said she doesn't like selfies because the interaction is very impersonal. She said, "If anything is going to be impersonal on this campaign trail, I prefer it to be me."

There was another debate between Hillary Clinton and Bernie Sanders in New Hampshire. They've already had so many debates they're starting to run out of things to fight about. Tonight they sat there quietly like an old married couple at a restaurant.

President Obama said Hillary Clinton is approaching one million frequent flier miles in her job as Secretary of State. Though even that can't get her upgraded to the seat she really wants.

Hillary is facing criticism for declaring victory in Iowa prematurely. The final results weren't actually announced till around 1 p.m. on Tuesday, but she declared victory back in April of last year.

At a town hall in Iowa, a voter asked Hillary Clinton how her views align with the Ten Commandments, and she said that "in many areas judgment should be left to God." Then God was like, "OK. You really shouldn't have deleted all those emails."

New polls found that Bernie Sanders is now ahead of Hillary Clinton among Democrats in both Iowa and New Hampshire. And even Hillary's lead in national polls is dwindling. I don't want to say Hillary is upset, but this morning she was spotted shouting into a volcano, "You said we had a deal!"

Happy birthday to Hillary Clinton, who turned 68 today. When asked what her favorite gift was, she said, "Donald Trump."

John Kasich, who came in second for the Republicans. And some celebrities are even starting to support him, even Arnold Schwarzenegger. However, a spokesman for Schwarzenegger said it's not an actual endorsement. When asked why, Schwarzenegger was like, "Because even I am afraid of Hillary!"

Last night CNN hosted a Democratic forum where Hillary Clinton said that if she's elected she wants to work together with Republicans and even said she'd give them all bear hugs. By bear hugs she means like the ones you saw in The Revenant.

Ben of Ben & Jerry's is coming out with an ice cream for Bernie Sanders called "Bernie's Yearning." It's selling a lot better than Jerry's ice cream for Hillary, "Pantsuit Email Crunch."

Yesterday Hillary Clinton made the big announcement we all knew was coming. She's going to join the all-female cast of Ghostbusters.

The Marco Rubio campaign is now selling a T-shirt that calls Marco Rubio "bae." Hillary Clinton called it "such a desperate attempt to appeal to young people, I can't believe I didn't think of it first."

The Bernie Sanders campaign is demanding proof that Hillary Clinton beat him in yesterday's Iowa caucus. Today Hillary said, "Sure, let me check my server."

Bernie won 83 percent of young voters. The only group Hillary won was voters over 65. So she may not have won New Hampshire, but she definitely won Old Hampshire.

One candidate who did not do so well last night is the winner of the 2016 presidential election, Hillary Clinton.

Merry Christmas, Hillary [to self]. In just 11 months you're going to finally get your present. No one can stop you now. The Republicans are bozos. The DNC is sabotaging Bernie. I think you're going to sleep well tonight.

New Rule: Republicans trying to turn the Benghazi attacks into a scandal that taints Hillary Clinton's chances at a 2016 presidential run must realize that scandals don't weaken Hillary Clinton, they only make her stronger. Travelgate, the Rose Law Firm, Whitewater, Vince Foster, Monica Lewinsky... Hillary Clinton eats scandals for breakfast. If the Republicans keep this up she'll not only be President, she'll appoint Bill to the Supreme Court.