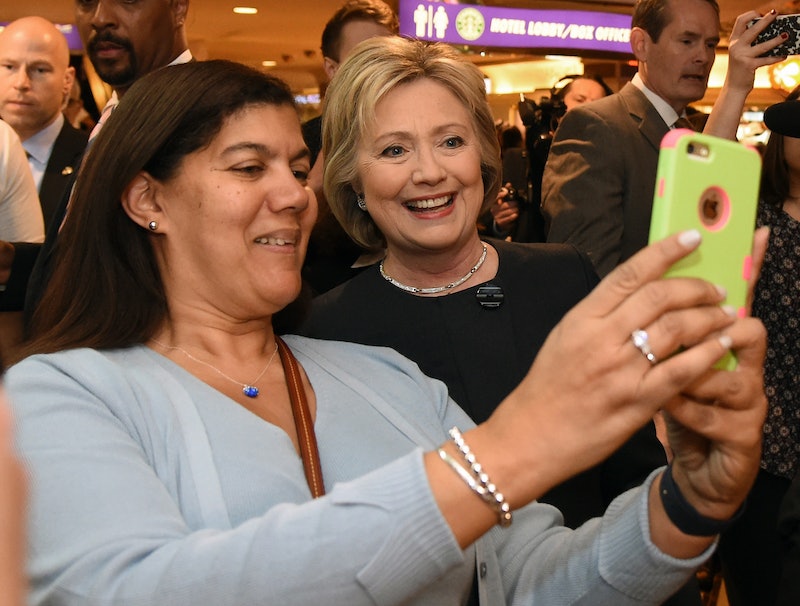 Some people accuse their younger counterparts of being less interested in politics (cough, cough, Debbie Wasserman Schultz), but teenage sisters Addy and Emma Nozell set out to prove the haters wrong. The sisters from Merrimack, New Hampshire, located just outside the city of Manchester, managed to get a selfie with (almost) every presidential candidate from this election cycle and gained online fame as the Presidential Selfie Girls.

Due to their proximity to political hot-spots like Saint Anselm College, where the Republican debate was hosted earlier this month, the Nozell sisters were able to capitalize on the unique opportunity to commemorate the presidential election in selfie form. Since their first selfie with Chris Christie in July, Addy and Emma have wrangled selfies with 22 of the most popular presidential candidates.

The girls, who have now become poster children for youth involvement in politics, got their interest in politics from their mom, who has taken the sisters to political events for most of their lives. "You don't take them to Disneyland, you take them to local events," said their mother Wendy Thomas during an interview with The Today Show back in November. "Not only are they getting the selfie, but they're listening to each of the candidates. And then we come home and we have a discussion about the points that each of the candidates have made."

A flip through their online scrapbook, immortalized on their Twitter page @PrezSelfieGirls, is almost nostalgic. Short lived contenders like Lincoln Chafee, Rick Perry, and Bobby Jindal are gone but not forgotten, and pictures with more recent losses like Carly Fiorina and Rick Santorum are reminders of a race well run (kinda). The girls finished the project with the final selfie featuring Mike Huckabee in October, completing their collection. The only big candidate missing is Jim Webb, whose brief campaign never made it to New Hampshire. However, the sisters did get a tweet from the former senator apologizing for missing a scheduled campaign event the Nozells had planned to attend, so it's almost like a selfie.

But the girls didn't stop once they had accomplished their goal. After accumulating a bit of a press following, the girls were able to score selfies with some other VIPs, including Madeline Albright, Rachel Maddow, and Chelsea Clinton. The girls snapped pictures with some less popular candidates too. In January, Emma and Addy attended the Lesser Known Candidates Forum in Manchester and listened to the panel of five Republican candidates and 18 Democratic candidates who don't have the name recognition of the top tier contenders.

At the end of the night, Addy and Emma snagged selfies with some of those panelists, and a few days later, Emma sneaked a covert selfie with Vermin Love Supreme, the anarchist candidate who came in fourth in the New Hampshire Democratic primary with only 259 votes.

For the girls, this wasn't just a fun project, but an earnest effort to be politically informed. “No matter what age you are [they are] going to be your president, so you should know what they say and think," Emma told BuzzFeed in an interview.

Sadly, Emma just turned 16 in December, and therefore will miss the cutoff to be able to vote in this election. But Addy will turn 18 before the election, and based on their "official endorsement selfie" with Hillary Clinton, she will most likely vote for Clinton come November.

More like this
Romance Authors Are Mobilizing For Reproductive Rights
By Natalia Perez-Gonzalez
Buckingham Palace Shuts Down Rumour About King Charles III's Coronation
By Sophie McEvoy and Sam Ramsden
New Coins Unveiled As King Charles III's Reign Gets Underway
By Sam Ramsden
Bella Hadid's Best Runway Looks From Paris, Milan, & More
By Allie Fasanella
Get Even More From Bustle — Sign Up For The Newsletter