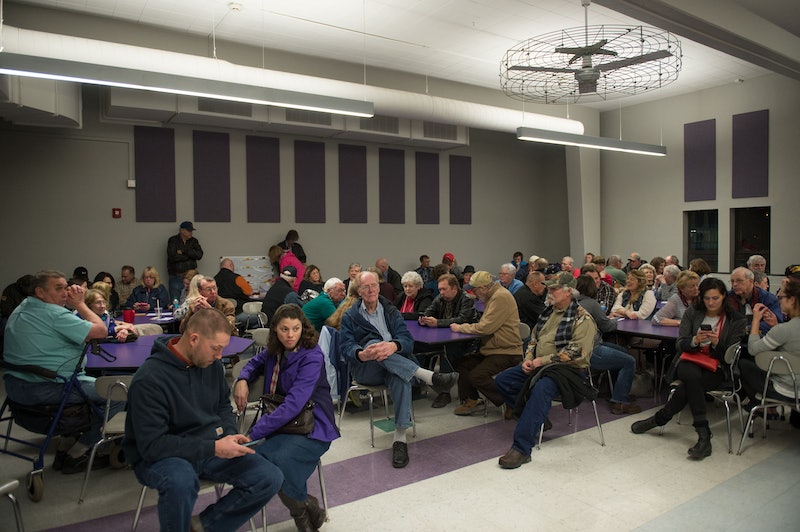 The nomination of presidential candidates is not exactly a simple, predictable process for many reasons —not least of which is the fact that states hold different types of elections to determine who wins their contests. Most states hold primary elections, but some states hold caucuses, which are quite different in structure. With the Nevada Democratic caucus fast approaching this coming Saturday, there are several things people following the election closely may be wondering about the process in the Silver State. Namely, the obvious question: how do the Nevada caucuses work?

First, it's important to understand the difference between a primary and a caucus. Caucuses feature a very public form of voting. As the Reno Gazette-Journal explained, voters gather at a caucus site, discuss candidates, and cast their vote by standing in a certain part of the room with others who support their candidate. If a candidate does not have enough support to receive a delegate at a caucus site, people supporting that candidate can then change their minds and stand in support of another candidate. There's also a difference between the parties when it comes to who can participate in the caucuses. Voters participating in the Democratic caucuses can register the day of the event, while Republican participants must be registered with the party as of Feb. 13.

There are 35 delegates at stake in Nevada for Democratic candidates (along with eight superdelegates, who don't have to base their vote at the Democratic National Convention on the results of the caucus). There are 30 delegates up for grabs for Republicans on Feb. 23. The 35 Democratic and 30 Republican delegates will be awarded to candidates proportionally.

The first states to hold primaries or caucuses have a special place in the electoral process, as they help set the tone for campaigns, sometimes propelling or sinking nominees early on in the process. Nevada achieved early-state voting status for the 2008 presidential election, after Senate Minority Leader Harry Reid pushed for Nevada, his home state, to get the special spot in the election cycle, according to the Associated Press. Unlike Iowa and New Hampshire, Nevada is a western state and one with a more diverse population — particularly, a large Hispanic population — making it more representative of the country than its two predecessors, which have predominantly white populations.

The results of the Nevada caucuses could very well impact how and whether candidates proceed to Super Tuesday on March 1, when more than one-fifth of Democratic delegates and one-fourth of Republican delegates will be at stake. For both Democrats and Republicans, what happens in Vegas definitely won't stay in Vegas.