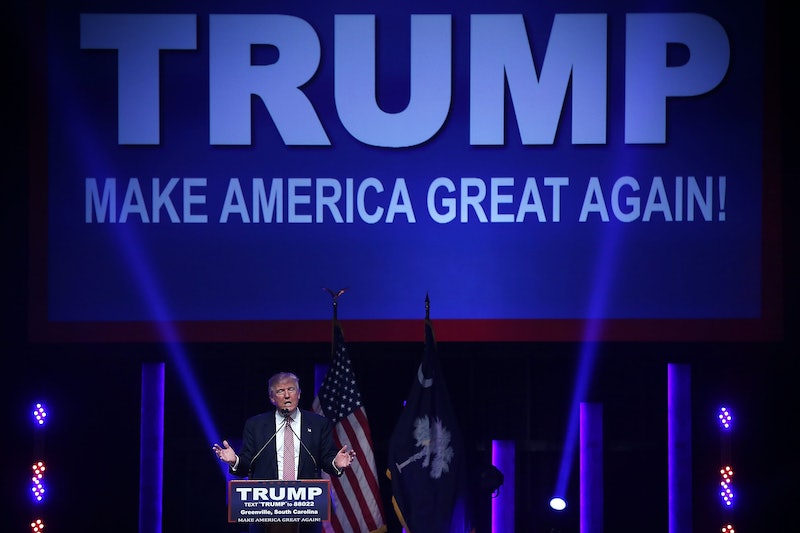 Just when the Republican presidential race started to narrow down and simplify a little, Donald Trump is sweeping through to make things complicated again. The GOP frontrunner has scheduled a town hall meeting moderated by Morning Joe's Joe Scarborough and Mika Brzezinski as counterprogramming against CNN's coverage of the showdown between Ted Cruz and Marco Rubio. Both events will air on Wednesday at 8 p.m. ET, so unfortunately, you'll have to pick just one to watch live. And if you choose to watch the Trump town hall, you'll have to watch it live.

Although many of the debates, including the recent one on MSNBC, have been streamed online at the same time as their TV broadcasts, if you want to watch the Trump town hall live, you're going to have to find a TV with cable access. But if that's not possible, don't worry too much — an MSNBC spokesperson says that they'll post clips online once the event is over.

This one-hour, two-on-one interrogation should actually be fascinating to watch. Trump is famously combative during debates and often resorts to underhandedly insulting his fellow candidates, but that won't be an option during this solo endeavor. Just Trump and two moderators doesn't give him a lot of room to wiggle out of substantive questions, so hopefully, Trump will have to face a fair share of hard-hitting inquiries.

However, Trump has a personal history with the Morning Joe hosts that some consider too close. Scarborough and Brzezinski have recently come under fire for being a little too buddy-buddy with him. CNN reporter Dylan Byers reported that the talk show hosts "hung out in Trump's hotel room during [New Hampshire] primary returns," which sparked a Twitter skirmish between Scarborough and Byers. Scarborough denied the claims via Twitter, but also refused to officially go on the record and say that he was not in Trump's hotel room that night. MSNBC said the hotel conversation was an interview with the candidate that "lasted less than five minutes."

Trump pulled off this latest political maneuver with the same finesse as Beyonce's surprise album drop. On Tuesday, MSNBC added a Trump Town Hall countdown clock to its broadcast. The unexpected event will probably achieve several key goals for Trump. It'll draw attention to himself, draw attention away from his closest rivals, and therefore give him the advantage when all the Republican candidates face off again at the next debate in Houston. Of course, it's all dependent on his performance Wednesday night, so tune in to MSNBC at 8 p.m. ET to see it all go down.