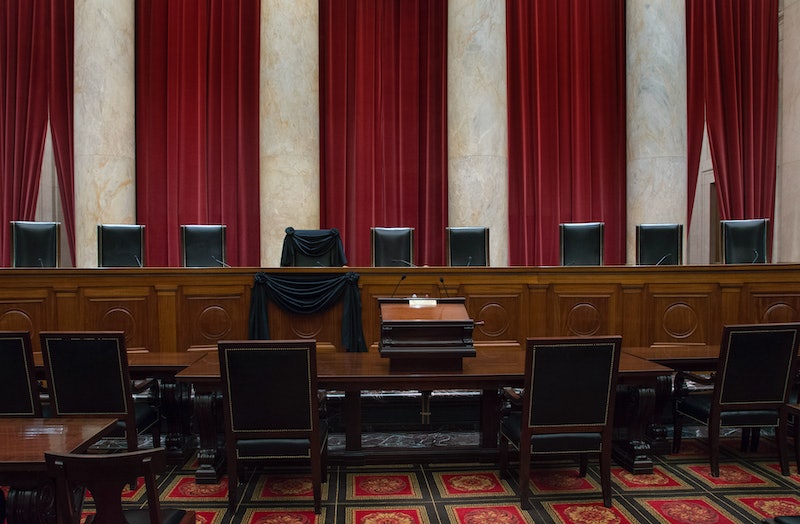 After Supreme Court Justice Antonin Scalia's unexpected death on Saturday, controversy has erupted over the nomination of his replacement. Leading Republicans, including Senate Majority Leader Mitch McConnell, have already vowed to block any nominee President Barack Obama may put forward, arguing that the task should fall to the next president. However, in an NBCNews press conference Tuesday, Obama affirmed that he will nominate someone during his final year in office. Who might the Supreme Court nomination go to?

That, of course, is a matter of speculation at the moment. According to Obama, "We're going to find somebody who is an outstanding legal mind, somebody who cares deeply about our democracy and cares about the rule of law." He then clarified: "There is not going to be any particular position on a particular issue that determines whether I nominate them."

That doesn't leave us much to speculate on. However, legal analysts and journalists have expressed their informed ideas about whom the president may opt for to replace Scalia. Some of the following candidates are most likely if the president has an eye toward convincing Senate Republicans to consider his nomination; others are good bets if the president chooses to nominate based more on progressive positions.

Tom Goldstein, appellate advocate and publisher of SCOTUSblog, put his predictive prowess behind Loretta Lynch, Attorney General for the Department of Justice, as Obama's nominee. Goldstein suggested that Lynch's career as a prosecutor undermines the idea that she's too liberal, and noted that she was recently vetted for her Attorney General position, which may make the vetting process for Supreme Court Justice go more quickly. Lynch also served as a federal prosecutor in New York's Eastern District, and if confirmed, she would be the first African American woman to serve on the Supreme Court.

Shortly before backing Lynch as the most likely nominee, Goldstein gave that title to Paul Watford, whom Obama appointed to the Ninth Circuit Court of Appeals in 2012. Nine Senate Republicans voted to confirm Watford to his current position, which Goldstein said could give Democrats ample reason for arguing against a refusal on the part of the GOP-led Senate to hear his nomination. NPR reported that Watford is considered a moderate. He has worked under Alex Kozinski, a conservative judge, in the Ninth Circuit. He has also clerked for Ruth Bader Ginsburg, who currently serves on the Supreme Court.

Politico reported that Srinivasan was confirmed to his position in May 2013 by a 97-0 vote. He's a moderate, and the unanimity of his confirmation so recently could make it pretty awkward for Republicans to refuse to give him a hearing for the Supreme Court. He would be the first Indian-born Supreme Court Justice. Srinivasan has also served as principal deputy solicitor general of the U.S.

Garland serves as the Chief Judge of the United States Court of Appeals for the D.C. Circuit. In the wake of Justice John Paul Stevens' retirement in 2010, NPR reported that Garland was on a short list of possible replacements, with only two others considered for the spot. Garland was thought a moderate, and NPR believed he'd garner greater support from Republicans than the other contenders. This could make him a strategic choice in a time when Republicans are promising not to even consider the president's nomination.

Millett is a U.S. Court of Appeals judge in the D.C. Circuit who was appointed by Obama and confirmed by the Senate in 2013. She also served as Supreme Court litigator at the Department of Justice, Politico reported. Millet's confirmation to the U.S. Court of Appeals was contentious, according to Politico; Republicans threatened to filibuster, and the Democrats actually changed filibuster rules in the Senate in response, making it so that only Supreme Court judicial nominees could be filibustered. Despite the trouble, Goldstein said that Millett is a favorite among Democrats.

California Attorney General Kamala Harris was mentioned by David Axelrod, former advisor to Obama, as a potential nominee. She is the daughter of Jamaican and Indian immigrants, and is running for Barbara Boxer Senate seat, as Boxer is retiring this year. The Los Angeles Times reported that due to her Senate bid, Harris doesn't want the Supreme Court nomination: "I’m not putting my name in for consideration. I do not wish to be considered. I am running for the United States Senate."

Patrick was a Democratic governor of Massachusetts. According to The Washington Post, Obama and Patrick share similar opinions and approaches to the Constitution. He has a background in civil rights law, and his work experience includes serving as an attorney for the NAACP Legal Defense and Education Fund, for which he continued to volunteer once he began practicing law privately.

Florida Rep. Alan Grayson wants Massachusetts Sen. Elizabeth Warren to be the Supreme Court nominee so badly that he started a petition asking the president to nominate her. Aside from serving in the Senate, Warren was a Harvard Law professor for several years. She is well-known for her very liberal positions on the economy and campaign finance reform. A Warren nomination would thrill progressives, but likely wouldn't get far in the Senate in 2016.

Cuéllar serves as an associate justice on the State Supreme Court in California. Cuéllar is young, Mexican-born, and highly accomplished. The vote that got him into his current position was both bipartisan and unanimous. He has an impressive resume, including work as a professor of political science and of law. He has served the White House in a variety of capacities, including as Special Assistant to the President for Justice and Regulatory Policy for the White House in 2009 and 2010. And he's head of the Language Access Implementation Task Force in the California Judiciary. According to The Daily Beast, a Republican refusal to hold a hearing for this Latino Renaissance man would not go over well.

Kelly has served on the Eighth Circuit Court of Appeals in St. Louis since 2013. She was confirmed to the position with a 96-0 vote. Importantly, she had the support of Republican Senator Chuck Grassley, who is Chairman of the Senate Judiciary Committee and will play a leading role in the nomination hearing process. She has a long history as a public defender.

Nguyen is a Court of Appeals judge in the Ninth Circuit. She's the first Asian-American woman to work in the appellate courts. She has also worked as a district court judge and a federal prosecutor in Los Angeles. She was confirmed to her current position in 2012 by a 91-3 vote in the Senate.

There are no sure nominees yet, but we shouldn't be surprised to hear more about these folks in the coming weeks. Some stand out as wise choices in the current political climate, and would make it difficult for the Republican-controlled Senate to follow through on threats to block any nominee Obama may bring forth. Others may face greater challenges in the hearing process, but reflect more progressive positions. Obama has a lot to weigh, and his decision likely won't be easy.