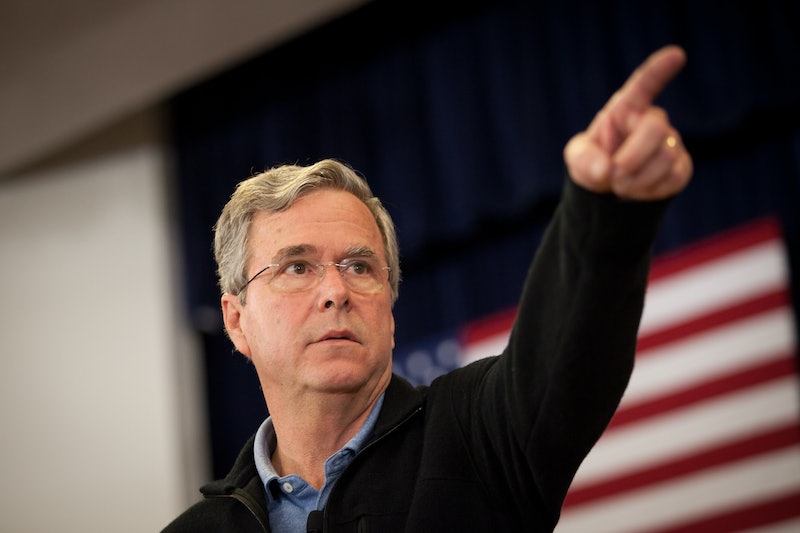 In an effort to appeal to South Carolina voters Tuesday afternoon, Republican presidential candidate Jeb Bush tweeted a photo of his gun that had the words "Gov. Jeb Bush" engraved into the weapon. His image caption read "America," and he it quickly found some favor as the tweet earned him a follow from the NRA, which has reportedly already followed most of the other Republican candidates. But Bush's tweet not only got the attention of the NRA: many others responded in various ways, including bringing light to the serious issue of gun control in this country.

With his A+ rating from the NRA, Bush told CNN at an event last June, "Florida is a pro-gun state. Gun violence has dropped. There's a reason for it. We created a balance that's focused on lowering gun violence but protecting the Second Amendment, and it's a model for many other countries and many other states because of that." However, the U.S. has the highest rate of gun deaths when compared to countries in Western Europe; the second highest rate (behind Albania) compared to Central and Eastern Europe; and the second highest rate (only to Iraq) compared to the Middle East and North Africa region.

Another Twitter user referenced Florida's controversial "Stand Your Ground" policy that George Zimmerman claimed as his defense after killing Trayvon Martin in 2012, although the same policy criminalized Marissa Alexander who faced 60 years in prison after firing a defensive warning shot near her abusive husband.

Journalist Marcy Wheeler tweeted a photo of the students who were killed at Sandy Hook Elementary School on Dec. 14, 2012:

And Edward Snowden chimed in for the second day in a row with a Jeb jab:

MSNBC national reporter Trymaine Lee responded with the most perfect tweet that read:

And Lee is absolutely right. Guns and gun violence are everywhere across the U.S. According to the Gun Violence Archive, just last year there were 53,046 total gun-related incidents and 13,385 reported deaths by gun. And already in 2016, there have been 6,215 gun-related incidents, and a reported 1,603 deaths.

And even further than the rate of yearly shootings, misogyny is also killing women at an alarming rate. According to The Trace, a website that reports on guns in America, women are fatally shot by current or former partners every 16 hours in the U.S. The Associated Press found that 6,875 people were shot by their partners between 2006 and 2014, and more than 80 percent of victims were women.

Not only are guns used at an alarming everyday rate, but they are also extremely accessible — Second Amendment or not, that's not necessarily a good thing. In fact, once everyday during the 2015-2016 academic year so far, a kid brought a gun to school — more than 135 firearms since August.

So yes, Jeb Bush, your gun tweet really is the definition of "America." But I don't think that's a good thing.