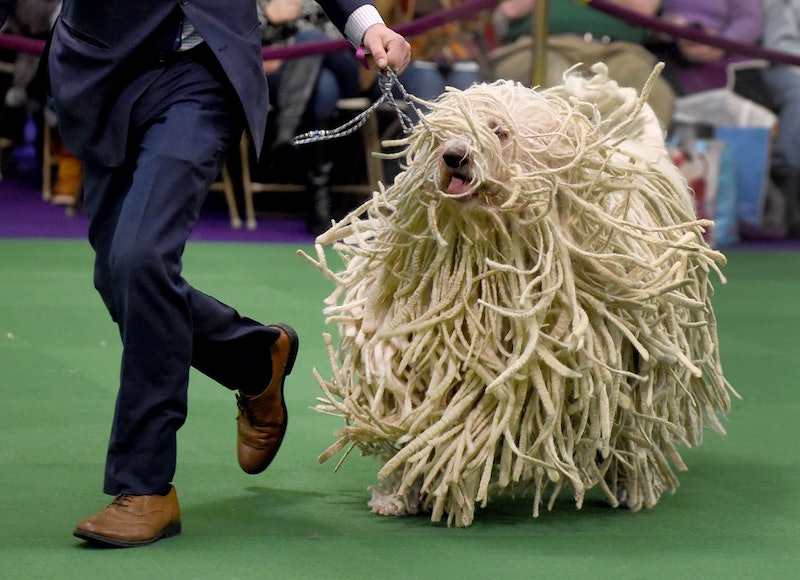 The 140th annual Westminster Kennel Club Dog Show on Tuesday was the perfect timeout from presidential primaries and campaigning, and there were definitely some unforgettable dogs in this year's competition. After what was ultimately a ruff competition, the two-day canine event of the year came to a close with over 2,700 dogs competing for the Best In Show title, representing 199 total breeds. A German Shorthaired Pointer named CJ was honored with the 2016 Best In Show title. CJ is the third dog of his breed to win the title, after his grandmother Carlee won in 2005, and Traveler before her in 1974.

The dog show, which takes place once a year at Madison Square Garden in New York City is the second oldest continuous sporting event in the U.S., just behind the Kentucky Derby. The first ever Westminster Kennel Club Dog Show took place in 1877 with 1,201 dogs entered in the competition. Not bad for its first year of existence. And what a fun and furry event to come back to every year, with some of the cutest, funniest, and ugliest dogs around — of course, no one said they couldn't be all three!

We've got a roundup of some of the official and unofficial winners of the 140th annual Westminster Kennel Club Dog Show.

CJ is 3 years old and was the official winner of the Best In Show title at this year's dog show. Man, has he accomplished so much already in his short life. He would like to thank all of his fans for their continued support, and his breeder and handler Valerie Nunes-Atkinson. Can we get a round of ap-paws for this good-looking pup?

This ball of fluff was spotted in the grooming area, and by the looks of it, it's not ready for its closeup! "Mom, I did not agree to this."

If Only "Treat Thief" Could Be Its Own Category

This Leonberger didn't try too hard during the Working Dog category. Or come to think of it, he actually worked extra hard to get the treats out of his handler's pocket. He may not have won the category, but he definitely won the hearts of the Internet.

These Poodles Are Ready To Go

Just look at that fierce hair — it looks better than mine even when I'm having a good hair day. Are these poodles here for the Kennel Club Dog Show, or are they trying out for the roles of the Pink Ladies in Grease?

Hello From The Other Side

Oh dear, could Adele's hit single be about this little terrier? I can't tell if he made it through that ring, but he sure looks cute trying!

The Bowl Cut Is Back

This pup wants to remind us all that the bowl cut is most definitely not outta style. And if you don't believe me, the poof is just above!

I don't think this dog is too happy about what's happening with its hair right now. Or maybe it's shooting some glares at the competition. Gotta give 'em a good scare to throw them off their game.

Can't tell if it's the handler or the dog that's getting ready for the grooming competition. But show business isn't for everyone. Sometimes the simple life is just what you need — and a real good tummy rub for a job well done. Keep doing your thing, you precious little pup!

Would You Smooch This Pooch?

I sure would! But I'd want to be very careful that I know first which side is the front, and which is the back...

Why The Long Face?

Hasn't anyone told you to smile today? Or maybe that's exactly what the patriarchy wants.

At the end of the day, we're sad to say goodbye to these pups. But until next year, I just have to say you all look PAWWWWFECT!

More like this
The 5 Best Rugs That Cats Can’t Destroy — & Why Your Cat Scratches, According To A Vet
By Danielle Calma
The 5 Best Cat Trackers
By Megan Gray
The 9 Best Duvet Covers For Dog Hair
By Claire Epting
Twitter Is Freaking Out Over Rihanna’s 2023 Super Bowl Halftime Show Announcement
By Stephanie Topacio Long
Get Even More From Bustle — Sign Up For The Newsletter