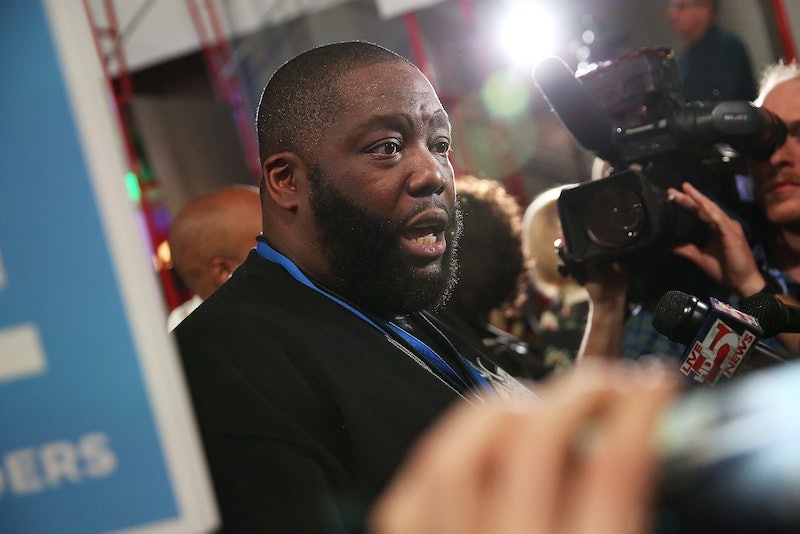 Democratic presidential candidate Bernie Sanders' band of supporters has grown in leaps and bounds over recent months, but rapper Killer Mike has been feeling the Bern for some time now. The hip-hop artist continued to show his love for Sanders, appearing at a campaign rally at Morehouse College on Tuesday to explain why Sanders should be America's choice for the Democratic nomination. And while he made some good arguments for a Sanders administration, Killer Mike's "uterus" quote got it all wrong about what makes someone qualified to be president.

In the midst of Killer Mike's speech to audience members, the rapper provided his version of how opposing candidate Hillary Clinton has been handling the issues facing African Americans and young Americans across the country. Killer Mike referred to Clinton only as "the other Democrat" and "she" throughout the address. (Killer Mike's speech starts approximately at the 33-minute mark, and the portion mentioned here starts at the 38-minute mark.)

The rapper then drew comparisons between Clinton and a more suitable candidate, presumably Sanders. And in making the case that Clinton isn't the best fit for the 2016 election, Killer Mike quoted social justice activist Jane Elliott, who told the rapper that having female organs doesn't necessarily make a person certified to run the country.

At the surface, Elliott's statement is totally true. Being of a particular sex or race or possessing any sort of specific physical quality should never be what qualifies a person to hold elected office. So, sure, having a uterus is most definitely not the primary qualification for becoming the country's president.

Now, think how ridiculous that last sentence sounded. Killer Mike and Elliott are way off base if they believe that the country would vote Clinton into the White House, despite Bernie Sanders' many wonderful qualities, merely because she has a uterus.

The country is only now reaching the threshold that would allow a woman to not be automatically disqualified because of her sex, and even that's not for certain. Sanders has an attractive platform when it comes to social justice issues, but Clinton has proven time and again her expertise on just about all the issues, her perseverance in dealing with opponents in Washington, and her commitment to the American people. Leave the organs out of it.