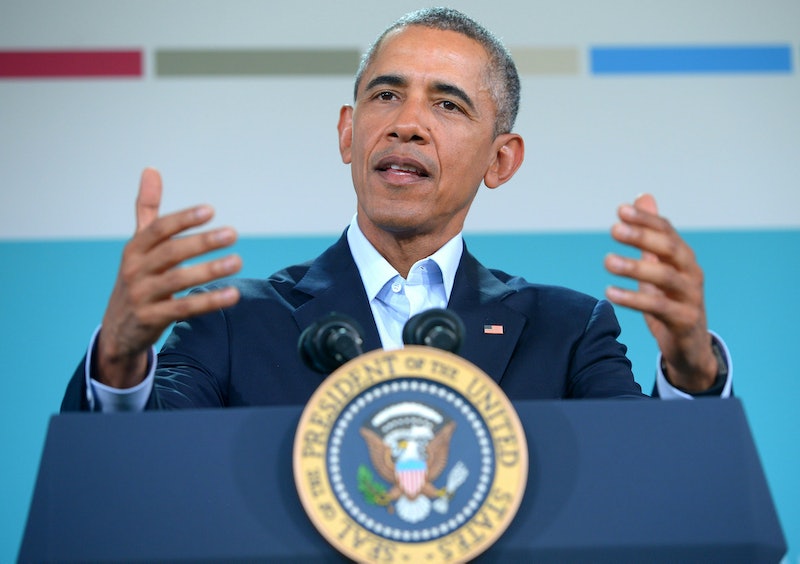 Were you a big Obama fan back in the day, and now you just can't decide between the two Democratic presidential candidates running in 2016? Do Hillary Clinton and Bernie Sanders attract different and conflicting subsets of your political beliefs and value system? Well that's because President Obama has become a hybrid of the two over the course of his administration, and he said as much himself Tuesday at a summit with Southeast Asian countries in California.

Obama sees himself in both candidates. He, like Sanders, ran as the idealistic change candidate in 2008, but since then he has also learned a great deal about the difficult process (side-eye to the GOP) of making things happen in Washington. That mirrors the more pragmatic Clinton from the campaign trail who insists on having achievable goals and has attacked Sanders' plans for being unrealistic.

At the press conference following the summit, Obama said he'd like to see the voters have their say before he adds his two cents. In the end, though, he will probably decide — opening the possibility of an Obama endorsement this primary season. Whether the "hopey-changey" or the realistic, get-stuff-done side will win, remains to be seen:

Ultimately, I will probably have an opinion on it, based on both — [having] been a candidate of hope and change and a President who's got some nicks and cuts and bruises from — you know, getting stuff done over the last seven years.

Seven years into his presidency, he sees it from both sides. While stressing that the debate should be held between the voters and the candidates, he did give a hint as to who he might relate with more:

You know, I know Hillary better than I know Bernie, because she's served in my administration, and she was an outstanding secretary of state. And I suspect that, on certain issues, she agrees with me more than Bernie does.

On the other hand, there may be a couple issues where Bernie agrees with me more. I don't know, I haven't studied their positions that closely.

More than anything he stressed — like a good politician for the Democratic Party — that it's what Sanders and Clinton have in common that makes them stand out from the rest of the crowd. In the same press conference he also criticized Donald Trump as unfit to be president and critiqued the candidates in the GOP field for having extreme views on immigration and Muslims.

He didn't respond to a question on whether Clinton is being fair in positioning herself as the heir to the Obama legacy while attacking Sanders for being disloyal. Again, he deflected:

That's the great thing about primaries. Everybody is trying to differentiate themselves, when in fact, Bernie and Hillary agree on a lot of stuff and disagree pretty much across the board with everything the Republicans stand for.

He listed off the many issues that Democrats and Democratic voters believe in, among them climate change, preserving Social Security and Medicaid, strong but cautious foreign policy, and regulations to protect the environment and keep banks from tanking the economy. The difference between the candidates, he said, is how to make those things happen.

Obama said in the end it comes down to a difference in tactics to get results:

Obama said the candidates should be run through their paces this primary season. The voters will ultimately get a chance to express themselves and decide who's best. There was one thing he could say definitively about the candidates, though: he's glad he's not one.

"The thing I can say unequivocally," Obama said, "I'm not unhappy that I am not on the ballot."