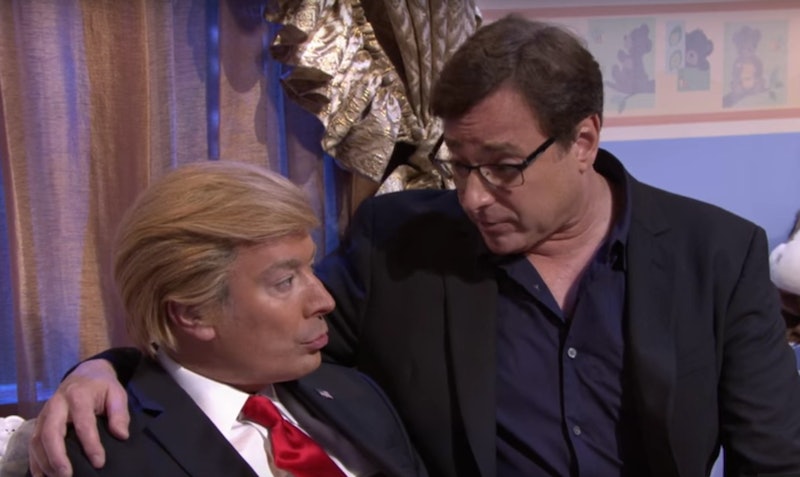 On Tuesday's The Tonight Show Starring Jimmy Fallon, Jimmy-Fallon-as-Donald-Trump joined America's favorite family from the '90s. The cast of Fuller House assured Trump that it's OK to lose his bid for president, with Fallon doing a spot-on impression of the billionaire. As Danny Tanner tucked Trump into bed, he admitted his fears of not making it to the White House, complaining that a President Hillary Clinton would be a step backwards. "Who wants to see something from the '90s come back in 2016?" Fallon as Trump quipped to the Fuller House characters in the room.

In a heart-to-heart with his dad, Trump explained what he was really scared of — America making fun of him if doesn't succeed. "Look, I know I won in New Hampshire — my numbers were huge," the fake Trump said. "But I'm afraid that if I don't win the nomination, everyone will say I'm a loser." His sitcom dad tries to comfort him, as any parent would. "Donald, I know winning is very important to you, but sometimes it's OK to lose," Tanner tells his adult-size son, who's sleeping in a child's bed made out of giant pencils.

Stephanie called out Trump for stealing her catchphrase after he exclaimed, "How rude!" as she, D.J., and Rebecca came in to see why the young Trump was up so late, interrupting his conversation with "his three dads." Apparently his tendency to call people rude was inherited from his older sister.

When the family's annoying neighbor, Kimmy Gibbler, barges in, the satirical Trump jokes that they need to build a giant wall to keep her out of the house — making her pay for it of course. "A ban on all Gibblers until we figure out what's going on," he said, evoking Trump's proposed ban on Muslims entering the U.S.

The family didn't approve of his plan to keep Gibbler out, telling Trump that they should treat their neighbor like part of the family even though she's technically not related to them. Uncle Jesse pointed out why his young nephew's plan was misguided, telling him: "If you really want to make America great again, you have to bring people together, not push them apart."

In the end, Trump's fictional family seems to be rooting against him. "Just remember, Donald, if you win and become president, that's great," Danny said. "But if you lose and don't become president, we'll be even prouder." Since it was Trump's bedtime, the Tanner dad put him to bed and kissed him goodnight after wishing for his failure.

More like this
10 Stranger Things-Inspired Halloween Costumes For True Fans
By Emma Carey
Nicola Coughlan Shared A Lady Whistledown Excerpt From ‘Bridgerton’ Season 3
By Grace Wehniainen, Alyssa Lapid and Sam Ramsden
Everything To Know About 'The Last Of Us' TV Adaptation
By Sophie McEvoy and Radhika Menon
A New 'And Just Like That' Table Read Pic Confirms A Key Character's Return
By Jack Irvin and Grace Wehniainen
Get Even More From Bustle — Sign Up For The Newsletter