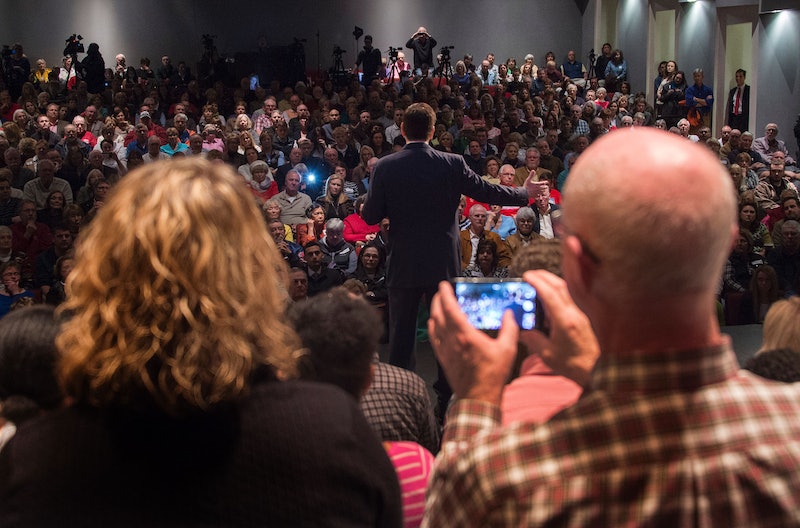 On Saturday, Republican voters in South Carolina will take to the polls to elect a potential president, and next Saturday, Democrats will follow suit. The unusual split primary schedule means there’s a lot of coverage to be followed, and you probably need to know how to watch the South Carolina primary results in real time. Luckily, there are multiple ways to follow along with the results.

You’ll definitely want to be following all the action because there's a lot at stake in the Palmetto State for both primaries. For the Republicans, the race looks locked up as Trump pulls away from the pack, but the bottom of the leaderboard shows some more potential dropouts. Ben Carson, John Kasich, and Jeb Bush are hovering at the bottom of the chopping block, and without strong support from South Carolinians, their futures in the race could be in danger.

South Carolina is the first primary state with a large African-American population, and appealing to those voters is vitally important to the success of any Democratic campaign. While Clinton has the overwhelming majority of the black vote at present, Sanders is working hard to appeal to young black South Carolinians. Canvassing efforts have drastically increased in recent weeks and Sanders’ campaign is dedicated to pulling black support away from Clinton, which could set a precedent for future primary elections.

This primary is the last before Super Tuesday, when a significant portion of the delegates will be awarded for the national conventions. South Carolina will make or break some campaigns, so you don’t want to miss a single second. Here’s how you can watch both primary results in real time:

If you've got an Internet connection, you're set to follow the primary results from myriad media outlets. USA Today has an online election center that may be the most comprehensive online. Everything you need to know updates in real time — precincts reporting, delegate counts, and county-by-county progress. Plus, 24-hour channels like CNN and MSNBC will feature live results and pundits on air until late into the night — CNN streams live on their website as well. But if you can't be online Saturday night, journalists typically tweet out results as precincts report on primary night and you can get those texted straight to your phone.

News media will follow this primary just as closely as the Republican election, so all the same outlets as above — CNN, MSNBC — should have the results in real time. In addition, POLITICO features an interactive map that breaks down which precincts have already reported, and Business Insider runs a great live blog that updates several times an hour to show precincts that have partially and fully reported. Local television and radio stations will often do up to the minute precinct updates on their websites too, so check out the South Carolina public media to see local coverage by local residents.

South Carolina is the final election of the First Four states to vote for in primaries, and the results will shape Super Tuesday in very interesting and revealing ways. You won't want to miss anything, so be sure to follow along with all the action.

Hillary Clinton campaign emails. Love songs. An unexpected combination, right? Not if you're our lifestyle editor, Emma Lord, who fused the two together in one unmissable track...