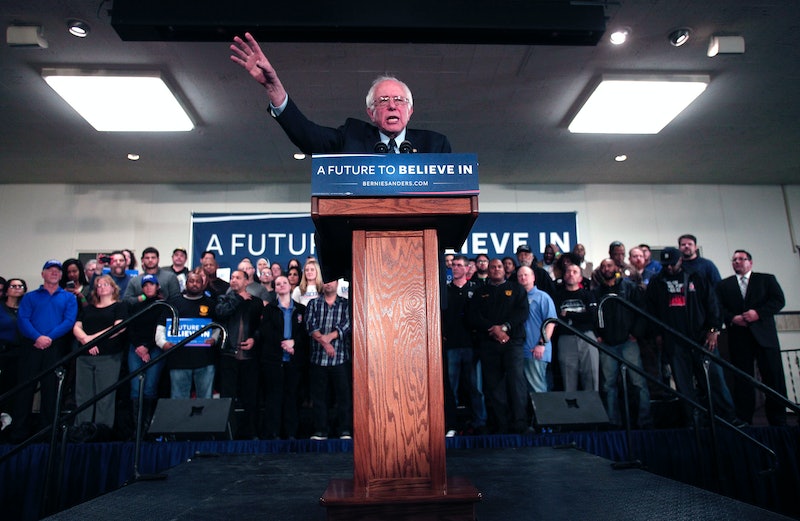 Don't look now, but we're almost there again! The Nevada caucuses are coming up, on February 20 for the Democrats and February 23 for the Republicans. And yes, you read that right ― we're going back to that kooky caucus system with which the whole race started off in Iowa, meaning that the results may be less predictable, and the process more contentious. But in the Silver State, the demographics look a lot different than they do in Iowa ― could Latinos determine the Nevada caucus results?

First things first, a necessary disclaimer. When discussing election politics, there's a problematic tendency towards portraying minority voters as a monolithic group that bears outsized responsibility and culpability for who wins, in a way that white voting habits are rarely scrutinized. If, for example, Bernie Sanders were to beat Hillary Clinton by five points with stronger-than-anticipated support from Latino voters, then those voters definitely did help determine the outcome ― albeit, just like all the thousands and thousands of white supporters on either side did.

That said, Nevada is undoubtedly one of the states where Latino voters will play a big role, by virtue of the state's demographic makeup. According to the United States Census Bureau's numbers from 2014, nearly 28 percent of Nevada residents identify themselves as Latino or Hispanic, and they account for about 16 percent of the state's eligible voters. And, of course, there have been some stark racial divides in the respective primary races so far.

On the Democratic side, the entire story boils down to these two questions: can Bernie Sanders increase his support among non-white voters, and/or can Hillary Clinton increase her support among young voters of all stripes? These are the fundamental deficits both campaigns are laboring under, and you're seeing it play out both in Nevada, with an aggressive outreach to Latino voters, and in South Carolina, with a similar emphasis on black voters.

Thusfar, at least as far as Nevada is concerned, it's looking like things are trending in the Vermont senator's direction: after trailing in the state by more than 20 points in December, recent polls show Sanders pulling into a dead-heat with Clinton in Nevada. This is a startling and no-doubt exciting development for the Sanders camp, and it shows that his appeal is broadening even in states not quite as lily-white as Iowa and New Hampshire. His polling numbers among Latinos were dismal earlier this year ― an NBC national survey from January 12th found that Latinos were supporting Clinton over Sanders by more than 20 points.

On the Republican side, however, things might be a bit more fraught and disharmonious, thanks to some of the intense, inflammatory rhetoric on immigration. Make no mistake, again, immigration isn't the only issue that Latino voters identify as important to them, but the tenor of the GOP race is such that it could be a hard issue to get around. The most infamous example, needless to say, is Republican frontrunner Donald Trump, who (in a freewheeling style that's become painfully familiar over the past several months) started generalizing Mexican immigrants as "criminals" and "rapists" within the first five minutes of his presidential announcement speech.

But it isn't just Trump ― the rest of the Republican field has been similarly imploding over immigration, thanks to the stridency of Trump's far-right, agenda-setting statements. As a result, would-be Republican contenders like Marco Rubio and Ted Cruz are spending their time attacking each other for allegedly supporting "amnesty" programs in proposed immigration reform bills in the Senate.

But here's the rub: the Republican candidates aren't competing for the full spectrum of the Latino vote, only the conservative, Republican-voting ones, which represent a slim minority. As such, there's not even any assurance that a firebrand like Trump needs to win big with Latinos to secure a win in Nevada ― he's already up by 20 points, with the caucuses just days away.

In short, if you're looking for where the influence of Latino voters is going to have the biggest impact, it'll almost certainly be on the Democratic side of things, by virtue of the far smaller number of Latinos who'd be caucusing for the Republicans at all. It's during the general election when the GOP will truly have to worry about its reputation with the full Latino electorate. And by then, of course ― remember, President Obama defeated Mitt Romney among Latinos by a staggering margin of 75 percent to 23 percent in 2012 ― it might be too late to improve their situation.