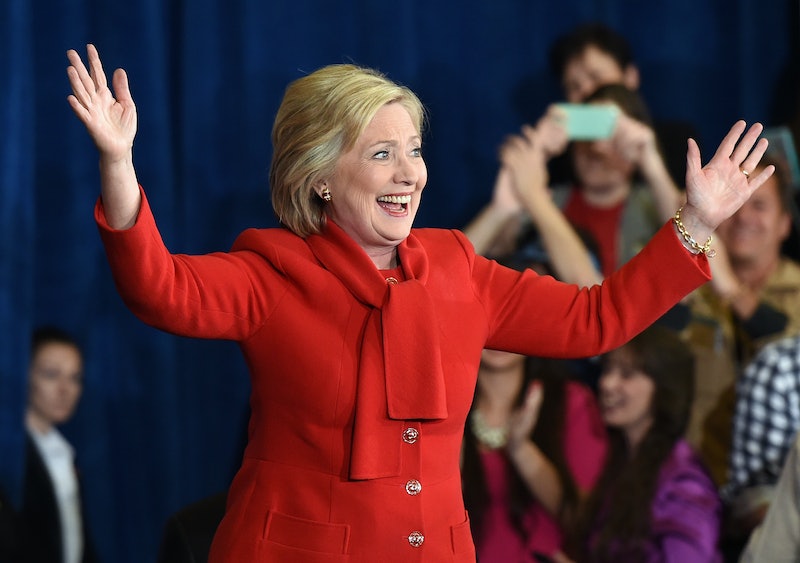 Hillary Clinton and Bernie Sanders are caught in a pretty tight race for the Democratic nomination for president. When it comes to the party's superdelegates, though, Clinton has a huge lead over the Vermont senator. As elected officials and party leaders who can vote for whomever they please at the Democratic convention in July, superdelegates have the power to sway the nomination — and this year, they're largely on team Clinton.

Of the party's total 4,763 delegates in 2016, about 712 are superdelegates. Because these delegates aren't tied to a specific candidate based on the results of their state's primary or caucus, their votes represent who the Democratic party's elite want to be the nominee. As a self-proclaimed democratic socialist, Sanders has less support from the establishment, though he practically tied with Clinton in the Iowa caucus and beat her in the New Hampshire primary.

More than half of the designated superdelegates have already pledged their support for Clinton — 362 to be exact. In comparison, Sanders has only eight in his pocket so far. In terms of normal delegates, Sanders is currently ahead of Clinton 36 to 32, but her expansive superdelegate backing gives her a lead of 350 overall.

Ahead of the Nevada caucus on Saturday, Clinton has the votes of three of the state's eight superdelegates, while one has publicly pledged to vote for Sanders. Similarly, three of South Carolina's six superdelegates vowed support for the former secretary of state before the Feb. 27 primary, and none have done so for Sanders yet.

However, superdelegates' votes aren't final until the convention. The beauty of being able to vote for whichever candidate they want is that they aren't locked in to a specific vote and can change their minds.

In 2008, Clinton also had more superdelegate support than Barack Obama, and eventually lost the nomination to the Illinois senator. In December 2007, the Associated Press reported that 169 of the free agents supported Clinton, while only 63 supported Obama. The difference now, however, is that Clinton has a much higher percentage of superdelegates on her side, with a 45-to-1 superdelegate advantage to Sanders versus the 3-to-1 lead she had over Obama around the same time in the election.

Either candidate needs 2,382 delegates to win the Democratic nomination (50 percent of the total 4,763, plus one), and Clinton was already 15 percent there before anyone had even voted, thanks to her superdelegate backing. This advantage won't necessarily win the nomination for Clinton, as it's still a small percentage of the needed delegates, but it could save her if the race remains close. If she's just shy of 2,382 normal delegates at the convention, the superdelegates could be enough to win her the nomination.