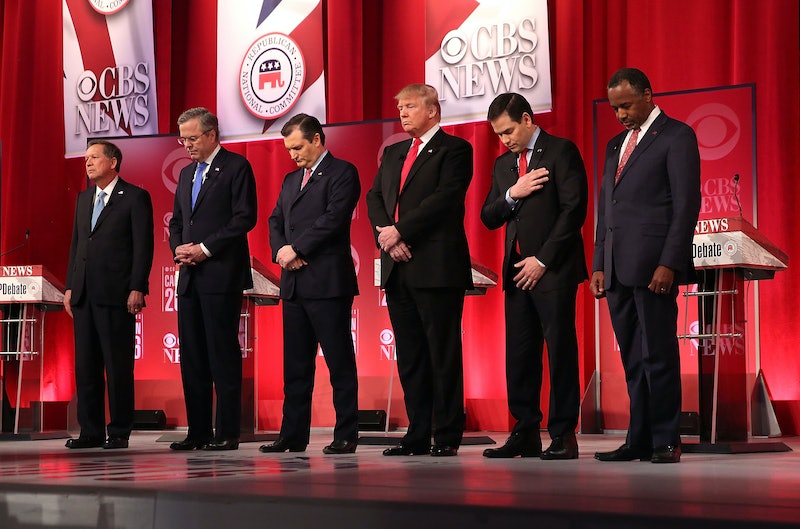 If you've persevered through the nine Republican debates that have taken place since August 2015, you've likely noticed that insults, shushing, and yelling are ever-present on the party's stage in this election cycle. Several of the candidates have relied heavily on attacking others to make themselves stand out, spending precious time sparring with fellow candidates rather than clarifying their own positions and qualifications. The back-and-forth between Gov. Jeb Bush and Donald Trump about the Bush family legacy, Sen. Ted Cruz dumping on Sen. Marco Rubio over his "Gang of Eight" immigration proposal — it's been ugly. That's why you should watch the Republican town halls Wednesday and Thursday; they promise to showcase the candidates in a very different light.

CNN will be hosting the two town halls, which will be moderated by Anderson Cooper. They will take place at 8 p.m. ET on both Feb. 17 and Feb. 18. Ben Carson, Cruz, and Rubio will appear on Wednesday night, and Gov. John Kasich, Bush, and Trump will be featured on Thursday. You can catch them on CNN, or livestream the events via CNNGo.

Town halls are different from debates in one crucial way: rather than having all candidates on stage at once, responding to one another at rapid-fire pace, each will get a chunk of time with Cooper to talk at great length about his proposals. There is no opportunity to hide behind attacking other candidates; sure, they can refer to and criticize one another, but there can be no interpersonal digressions, and the spotlight will be on the candidate on stage. Each candidate will ultimately have to stand on his own merit.

Another noteworthy feature of the town hall format is that candidates will not only respond to Cooper, but to voters as well. The event will take place in South Carolina, where the Republican primary election will take place on Saturday. The opportunity to hear each candidate interact with voters gives the town halls a more intimate touch, and provides candidates with an opportunity to relax on their more polished, scripted responses and show some spontaneity.

The Republican town halls will have some competition; Wednesday night's event will air at the same time as a town hall Donald Trump is holding on his own, which will be televised by MSNBC starting at 8 p.m. ET. On Thursday, MSNBC will be hosting a Democratic town hall in Las Vegas, Nevada, with the pre-show kicking off at 8 p.m. ET. With both the Republican primary in South Carolina and the Democratic caucuses in Nevada on Saturday, we've got a lot to keep our eyes on, and the Republican town halls deserve a place on the radar.