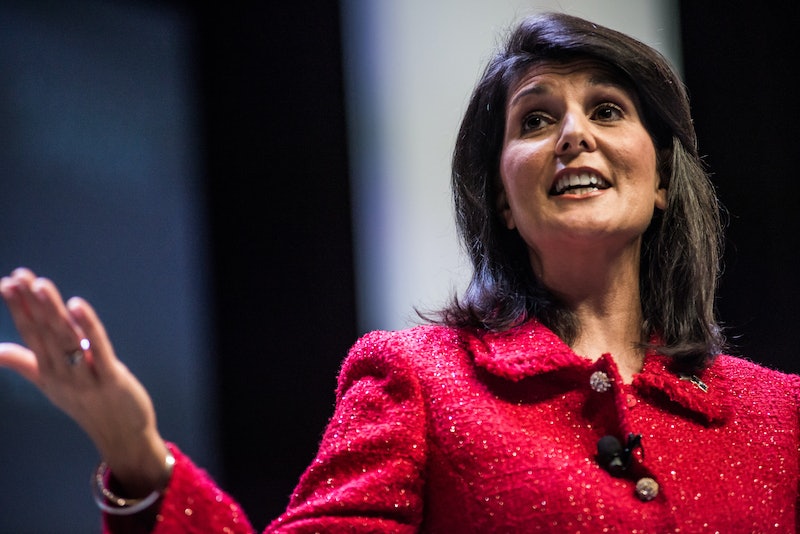 On Wednesday, USA Today reported that South Carolina Gov. Nikki Haley has endorsed Sen. Marco Rubio for president. She announced her endorsement at a rally in Chapin, South Carolina, where she said: "I wanted somebody with fight, somebody with passion, somebody with conviction to do the right thing, but also somebody humble enough to remember you work for all the people." The endorsement could prove crucial to Rubio's campaign, which has suffered some blows leading up to the South Carolina primary. Republicans vote in the state's primary on Saturday.

Rubio is currently in a dead heat with Sen. Ted Cruz for second place in South Carolina; according to Real Clear Politics' poll averaging from February, Donald Trump leads both senators by about 18 percent. Rubio had a strong showing in the Iowa caucuses, barely missing the second-place spot, which Trump took by 1.2 percent. But his campaign saw a setback in the New Hampshire primaries on Feb. 9, when he came in a disappointing fifth place, with 10.57 percent of the vote. That contest took place only three days after Rubio bombed at the New Hampshire Republican debate, where his incessant recourse to the now-infamous "Obama knows what he's doing" line left a vast majority of GOP insiders in agreement that he choked.

Haley's endorsement could be the redemption Rubio needs — and it could pay off big during Saturday's primary election, helping secure him the second-place spot (with Trump's lead so large, it might not quite be enough to propel Rubio to first). Haley is a very popular governor; Public Policy Polling reported in November that her favorability ratings are unusually high. She is well-liked by 71 percent of Republicans and 53 percent of Independents. Most significantly, 40 percent of Democrats like her, which Public Policy Polling stated was a rare result. Her endorsement may lead to some of that favorability rubbing off on Rubio.

Not that it's any reason for Rubio to kick up his feet and relax. He'll be participating in a Republican town hall on Wednesday, and he'd do well to shine there. And he's still confronting Cruz's attacks on his immigration policy track record; on Wednesday, Cruz released an ad comparing Rubio to Obama on immigration. Nothing is set in stone for the Florida senator, but one thing's for sure: Haley's endorsement can only help him now. Whether it translates to knocking Ted Cruz away from second place in the South Carolina primary remains to be seen on Saturday.