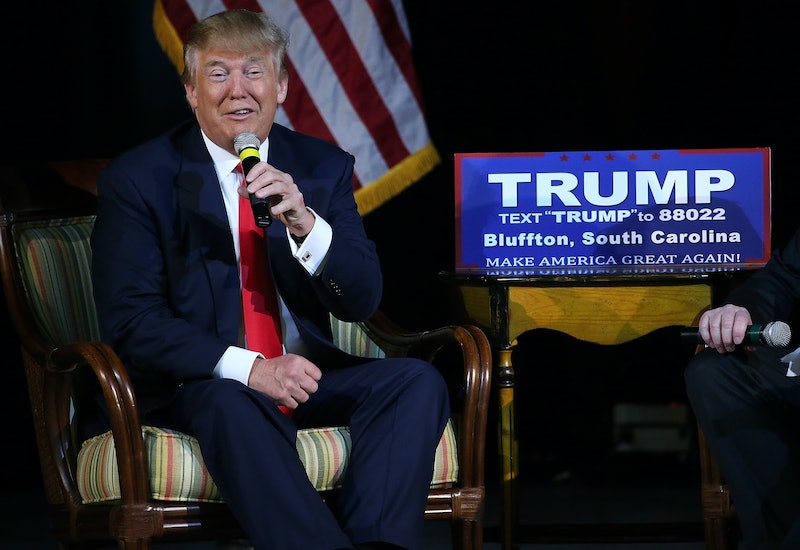 Donald Trump is many things, but shy on social media is not one of them. Throughout his campaign, Trump has become known for his Twitter rants and his rapid-fire attacks on pretty much anyone who stands in his way of becoming president. On Tuesday, these social media habits were perhaps the perfect demonstration of why a Trump presidency would be bad for women.

Many people who vote in the Palmetto State's GOP primary are socially conservative. While Trump has made plenty of noise in the presidential race so far, he hasn't exactly solidified himself as the most socially conservative choice on his side of the aisle. Heading into this weekend's primary, Texas Sen. Ted Cruz has begun to exploit this weakness, running attack ads that call into question Trump's stance on social issues, namely abortion. In response to Cruz's claims, Trump may have proven his opponent wrong, but he has also proven why he shouldn't be entrusted with executive power over American women.

In an attempt to set the record straight about his stance on abortion, Trump on Tuesday night said via Facebook that he is, in fact, pro-life and that he opposes Roe v. Wade. The only problem, though, was that he got pretty much everything about the landmark Supreme Court decision wrong. He noted that the country is approaching the anniversary of Roe v. Wade, which it is not. The case was decided by the Supreme Court in January. Trump also noted that this year marks the "43nd" anniversary of the decision. Sure, we all have typos, but perhaps this should be a sign to Trump that it's time to calm down the online rants.

There's not a poll that Trump misses, so it's a shame that he failed to acknowledge public opinion about the issue of abortion. Support for abortion is at an all-time high, with more than half of Americans — including many conservatives — calling for abortion to be legal in all or most cases. Trump has never been known as a particularly conservative candidate on social issues, and he could have used this opportunity to highlight a major point of contention between the Republican Party and the American public.

3. He Has Repeatedly Insulted Female Professionals

By now, you've likely heard about Trump's bitter attacks on Fox News' Megyn Kelly, but she's not the only working woman that Trump has disrespected. In 2014, Last Week Tonight's John Oliver showed a clip of Trump speaking about the Miss U.S.A. pageant, which he then owned, to a female reporter: "We could say politically correctly that the look doesn't matter, but the look obviously matters. ... Like you wouldn't have your job if you weren't beautiful." Additionally, Trump allegedly once called a female lawyer's need to take a break to pump breast milk "disgusting."

4. He Would've Forced A Government Shutdown Over Planned Parenthood Funding

In August, Trump said in a radio interview that he would have wanted the government to be shut down if that's what it took to defund Planned Parenthood. Shortly thereafter, though, he took a seemingly lighter stance on the women's health organization, acknowledging that abortion is just a small part of what Planned Parenthood does. Despite the discrepancy, it's safe to say that Trump's support of women's health issues is flaky and inconsistent, at best.

5. He Expects Women To Be Flirting With Him

It's not uncommon for women's politeness to be perceived as flirting by men, but Trump takes things a step further. In his book, How to Get Rich, Trump wrote that all the women on his show The Apprentice flirted with him, which was "to be expected." Currently, there are more women in Congress than ever before. Let's just hope there's no President Trump to accuse them of flirting with him.

Ultimately, Trump's brash attitude and bold voice rarely seem to be on the side of women. Thus, it's problematic for about half of the nation's population that he's currently leading in most of — if not all — the Republican polls. For a candidate who's so good with data and numbers, Trump seems to be missing the point of supporting the millions of female Americans and the overwhelming public opinion about certain women's issues.