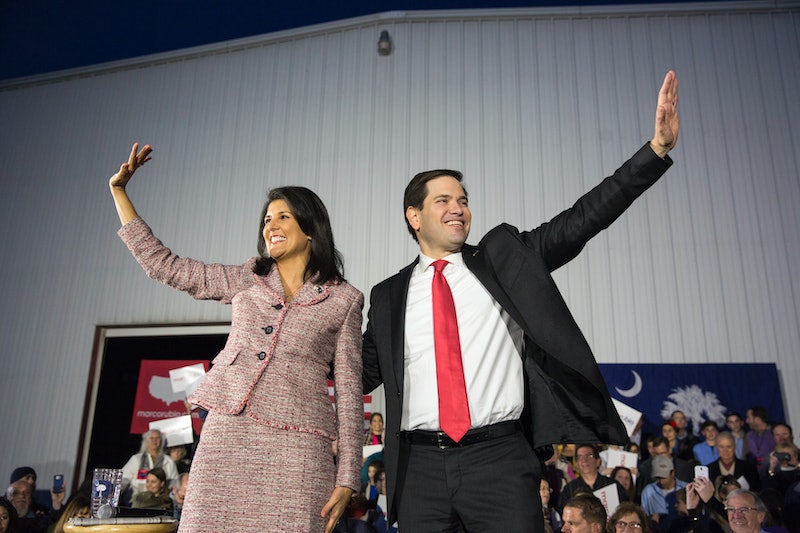 South Carolina Gov. Nikki Haley endorsed Florida Sen. Marco Rubio in the race for the Republican presidential nomination as the Wednesday evening dusk began to settle over a humble steel-clad warehouse in Chapin, South Carolina. Many are wondering why the most popular Republican in the state would throw her support behind Rubio, who is currently polling in third place both in South Carolina and nationally, according to aggregate polling from The Huffington Post. It becomes even more of a mystery considering that Haley has long been rumored as the current frontrunner for the Republican vice presidential nomination.

It is no secret that Haley prides herself as an independent voice, both in her state and in her party. During her 2010 campaign for governor, one of the foundations of her stump speech centered on her willingness to fight back against entrenched interests and the good-old-boy fraternity atmosphere that she claimed had corrupted the state. The Washington Post noted that a common refrain in Haley's first gubernatorial stump speech went something like this: "When you turn around and threaten their power and you threaten their money, they turn around and push back." She also presided over the removal of the Confederate flag from the statehouse grounds after the Mother Emanuel Church massacre in Charleston last year. Clearly she isn't afraid to make waves, but why make waves by going back and supporting a candidate with whom she clearly had issues with in the past?

In 2012, Haley endorsed eventual GOP nominee Mitt Romney on Dec. 16, 2011, weeks earlier than her show of approval for Rubio's candidacy. At that point in the race, Herman Cain had just dropped out of the field and aggregate polling showed Romney in second place nationally, behind former speaker Newt Gingrich. Endorsing Romney so far out before her state's primary illustrated a confidence that Romney might eventually secure the nomination, despite going on to actually lose in her state to Gingrich.

Despite Rubio's recent "malfunctions," he has been steadily gaining ground in the polls and, in some cases, is breaking even or pulling ahead of Cruz, perhaps indicating to people that are better reading the tea leaves than I am that he is on track to clinch the nomination. While she made it clear that Trump isn't the kind of leader she looks for in a president, given the popularity of He Who Must Not Be Named and Rubio's middling results on the delegate front so far, it isn't likely that he will come close to securing the nomination this time around. If anything, she should have considered hitching her wagon to fellow moderate conservative Gov. John Kasich, where they could make a strong appeal to what remains of the sane wing of American conservatives. It'll be interesting to watch how Rubio fares in the Palmetto State, and what the long-term ramifications of Haley's endorsement could be.