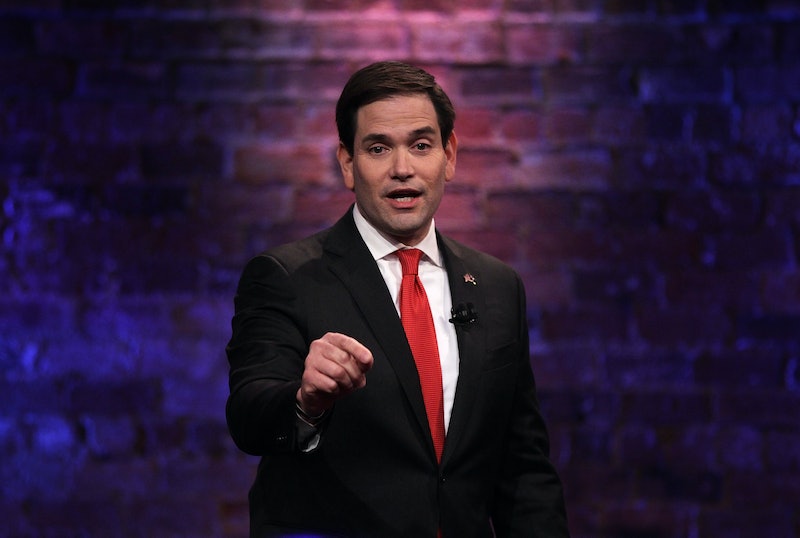 They may have a majority in both the House of Representatives and the Senate, but there undoubtedly seems to be some sort of disconnect between Republicans and the American people. In the current presidential election, candidates like Donald Trump and Ted Cruz are finding success by distancing themselves from the "establishment," the old boys' club that dominates Congress and the political party. Now, establishment candidate and Cuban American Marco Rubio may be presenting the GOP with an opportunity to reach beyond its traditional supporters.

On Wednesday, Rubio, a senator from Florida, discussed his personal experiences with racism during a CNN-sponsored town hall event in Greenville, South Carolina. "Some of the neighborhood kids, older kids, one day were taunting my family, saying, 'Why don't you get back on your boat? Why don't you go back to your country?'" Rubio said during the event.

Rubio was born in the U.S. to Cuban immigrants, and it's not the first time his Cuban heritage has been brought up, but it makes for a compelling narrative nonetheless. It's also a particularly relevant narrative, considering the widespread debate over immigration and the tension regarding race relations, both of which have infiltrated the political discourse throughout the candidates' campaigns.

Rubio also highlighted the diverse victories that his campaign has won recently. Earlier Wednesday, South Carolina Gov. and potential vice-presidential nominee Nikki Haley endorsed Rubio as her pick for the GOP's big ticket come later this year. Haley is not only a Republican woman, but she's also an Indian American. Haley notably dealt with the country's race-related issues in her own state when a young man with what seemed to be white-supremacist views opened fire on a historically black church in Charleston over the summer. Rubio also mentioned that Tim Scott, the African American junior senator from South Carolina, has also chosen to endorse him.

This ability to appeal to diverse members of the party could help Rubio sway undecided voters, both in his party and beyond. In South Carolina, primaries are "open," meaning that registered voters can choose to vote in either the Republican or Democratic primary, regardless of the political affiliations. The Palmetto State is often known for its first-in-the-South primary and the importance of winning over the state's black voters.

When it comes down to it, Rubio is still a conservative. Plenty of voters, regardless of their race or ethnicity, won't like that. However, if the new GOP establishment candidate is going to modernize the party and draw attention away from Donald Trump and Ted Cruz, appealing to those voters on the periphery, those who may be undecided or who may not fit the mold of the traditional Republican, could make all the difference.