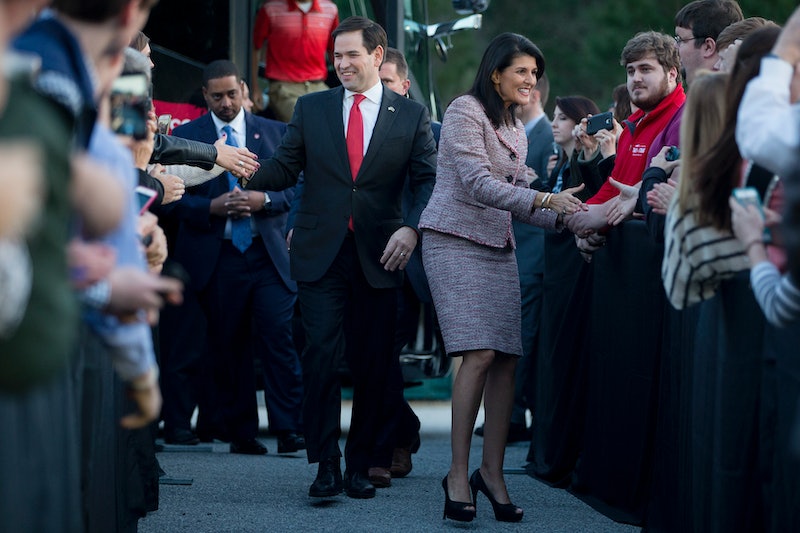 Among polled Democratic voters, 40 percent have a favorable view of her and 42 percent don't. No, these aren't Hillary Clinton's favorability ratings, but rather numbers for South Carolina Gov. Nikki Haley, and they're just the beginning of why a Marco Rubio-Nikki Haley ticket could spell trouble for Democrats.

Marco Rubio has gained a significant endorsement after Haley appeared alongside him at a campaign stop in South Carolina and pledged support for his campaign. Haley is apparently on many a shortlist for the vice presidential nomination; the two-term governor is one of the more popular in the country, according to research from the firm Public Policy Polling, with high favorability ratings from fellow Republicans and Independents as well as her decent numbers with Democratic voters.

A Rubio-Haley ticket would be groundbreaking in many ways, most notably due to the fact that both are first-generation American citizens. Rubio and Haley were born in Miami and Bamberg, South Carolina, respectively, to parents who immigrated to the United States from abroad. Not only are Rubio and Haley both good representations of the promise that America holds for immigrants, they bring balance to the messaging out of the Republican Party after the heated anti-immigrant rhetoric from Donald Trump and Co. so far. In her response to President Obama's final State of the Union address last month, Haley made a pointed dig at Trump, saying, "During anxious times, it can be tempting to follow the siren call of the angriest voices. We must resist that temptation. No one who is willing to work hard, abide by our laws, and love our traditions should ever feel unwelcome in this country." A Rubio-Haley ticket could therefore connect with moderate, socially liberal Republicans who may be feeling alienated from the process so far.

Recharging the party and increasing turnout amongst alienated moderates wouldn't be the only way that a Rubio-Haley ticket could potentially be troublesome for Democrats. According to aggregate polling data from Huffington Post, Hillary Clinton's favorability struggles among voters, with 43 percent nationwide holding a favorable view of Clinton and 53 percent unfavorable. As a regional figure, there just isn't as much data for Haley, however according to PPP, 71 percent of Republican women like her, along with 53 percent of Independents in addition to the 40 percent of Democrats who find her appealing. Women, especially young women and women of color, may see more of themselves in Haley than they do in Clinton.

Finally, a Rubio-Haley ticket would be one of the youngest combined tickets ever; only seven months apart in age, they are both currently 44 years old. One of the last times the combined age of a presidential ticket was so low was all the way back in 1920, when the Democratic Party ran Ohio Gov. James Cox, then 50, and the junior senator from New York Franklin Delano Roosevelt, then 38, against the much older Warren Harding and Calvin Coolidge.

Rubio and Haley could potentially represent a reboot of the Republican brand and make incursions into traditional Democratic demographics like young people, immigrants, people of color and women. Remember, millennials of voting age have overtaken Baby Boomers — not to mention are much more ethnically diverse. In an attempt to stave off a Trump presidency, the GOP could finally be shedding the perception that it is the party of crotchety, old men.