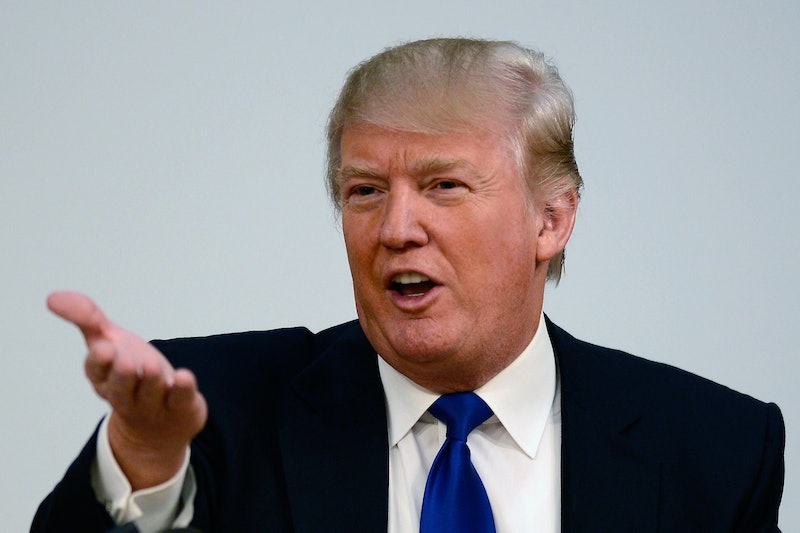 The Republican town hall hosted by Morning Joe hosts Joe Scarborough and Mika Brzezinski veered off track when Brzezinski asked Donald Trump a weird question. After describing a candidate and listing qualities like being a "political outsider, "delivering a populist message," and "bringing thousands of new voters into the political process," she asked Trump, "Who am I describing?" Trump, thinking the question was about himself, didn't miss a beat and said, "You're describing Donald Trump." Brzezinski said, "Actually, I was describing Bernie Sanders." Yikes.

You almost could feel the whole room cringe in unison, even if you were just listening to the stream in the background. Trump, ever the pro in handling the unexpected, just shrugged it off. He said, "Well, that's good," as the crowd chortled in the background. Scarborough attempted to gain control of the situation before Trump started rambling and talked everything from trade policy to Hillary Clinton, pretty much ensuring that the rest of the crowd would fall asleep.

So was Trump really on autopilot during the MSNBC town hall, or was he right to think that Brzezinski actually was talking about him? Let's break it all down and see whether Trump and Sanders have more in common than you think.

"The Candidate Is Considered A Political Outsider By All The Pundits"

According to this headline, even The Washington Post still considers Trump to be an outsider after dominating in the national polling aggregates pretty much since the beginning of August.

"He's Tapping Into All The Anger Of The Voters..."

So what is the average Trump voter angry about? The editorial cartoon heading up this article in the Los Angeles Times paints a pretty evocative picture, and Trump himself seems to revel in the rage he stirs when he repeatedly stumps against Mexicans and rails against political correctness. Although his recent attempts to pivot and talk about trade issues — jobs going to Mexico, not Mexicans themselves — don't seem to be connecting with voters, this claim is pretty much true.

Trump is both a popular and a populist candidate, and there is a definite distinction between the two. A populist is usually two things: in favor of policies that will directly benefit the majority of voters, and also anti-establishment, although the degrees and ways that a populist candidate are against the established order depend on the particular set of circumstances at any given moment in time. One of the last true populist candidates in the vein of Donald Trump was Louisiana governor and brief candidate for the presidency Huey Long. Controversial to this day, Long took concrete steps to expand access to healthcare, education, and upgrade infrastructure while running his own quasi-legal political machine in Louisiana.

Trump may actually be onto something when he talks about renegotiating free-trade deals like NAFTA in order to get good-paying skilled jobs to return to U.S. shores, like he mentions in his reply, however under current macroeconomic conditions, it is highly unlikely that the reintroduction of tariffs would be able to boost jobs without totally killing demand entirely; it's likely that quality American made durables like cars, air conditioners, and washing machines would simply remain out of reach for the majority of consumers without additional government subsidies.

"He Believes Everyone In The Country Should Have Healthcare"

Trump's vague positioning on healthcare is that programs like Medicare, Medicaid, and Social Security shouldn't be "cut to the bone" while promising to repeal President Obama's Affordable Care Act and replace it with an as-of-yet unspecified "something better" might mean that he believes everyone in the country should have health care. But, it might not.

"He Advocates For Hedge Fund Managers To Pay Higher Taxes"

Trump hasn't shied away from ripping on Wall Street during his stump speeches. He said, "The hedge fund guys didn't build this country," in a speech last August.

He isn't necessarily wrong here; although he got off to a rocky start when he allegedly used paid actors to staff his campaign kickoff rally, there isn't any denying that Trump has been able to attract an audience when he goes on the road. Whether or not these are new voters and not disaffected former Republicans or Democrats does remain to be seen.

"He's Not Beholden To Any Super PAC"

This one is true, as far as anyone can tell. Donald Trump's bid for the Republican nomination is entirely self-financed. If it's any measure of success, not only is he beating the scion of a powerful political family handily in the polls, he's also getting a much better bang for his buck than Jeb is when it comes to votes per dollar spent.

There is absolutely no way around it: Mika did ask a weird question in a weird way. But don't expect one errant question asked and answered awkwardly, to be able to halt Trump's rise in the polls. And who would have thought that Trump and Sanders actually do have a lot in common?