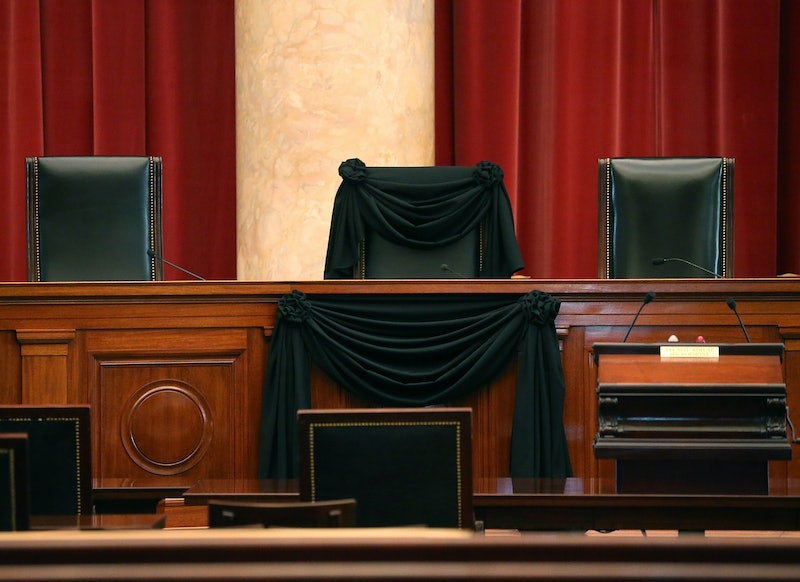 In a seriously backwards step, South Dakota is on the brink of passing an anti-trans bathroom law. And like a lot of things these days, the death of Supreme Court Justice Antonin Scalia could have a big effect on how this plays out. That’s because the Department of Education and the Department of Justice have been unequivocal in their support of trans students and their right to use the bathroom of their choosing.

The bill would require all students in public schools to use the bathroom, locker room, and shower facilities that corresponds with their assigned gender at birth — not their gender identity or gender presentation. Any trans student must be offered "reasonable accommodation," according to the bill. This could be a single-stall bathroom, or one previously dedicated to staff that could be repurposed.

If the ED or the DOJ precedents are to continue, this will not fly. The two federal agencies have come to agreements with districts around the country that have — in their view — violated the civil rights of students. Districts in California in 2012 and 2013 have been ordered to implement non-discrimination policies, train administrators, and, most importantly, allow students to use the locker rooms of their choice.

Then in November, an Illinois school district was threatened by the Education Department with sanctions and legal action after it failed to provide a transgender student equal, unrestricted access to the locker rooms. The school had required the student to change behind a curtain in the girls' locker room, which the ED found to be discrimination. They gave the school 30 days to comply or face DOJ court action and the loss of Title IX funding. The district complied.

Scalia's death comes into play if a school district in South Dakota were challenged over this new law. The district would be in the difficult situation of being forced to follow a state law, and as a result, lose Title IX funding, which helps pay for sports programming and ensures that men's and women's sports and athletes are treated equally. The school district could sue the state, or a student could sue a school district. Any sort of litigation could move up the chain rather quickly if a South Dakota court didn't rule it unconstitutional, based on the state's constitution.

If no ninth justice is confirmed, the matter would be decided by the appeals court — in this case, the Eighth Circuit Court of Appeals. That might not be so good for trans advocates. The current court is made up of an extremely high proportion of appointments made by Ronald Reagan, George H.W. Bush, and George W. Bush. It upheld Nebraska's same-sex marriage ban (albeit way back in 2006). When the issue came around a second time, the court deferred until the Supreme Court made its decision. Trans advocates, therefore, would be better off with an Obama nominee confirmed to the Supreme Court.

Whether the bill will be signed into law remains to be seen. It sailed through the state house 58-10 in January before being passed by a smaller margin Tuesday by the state senate. Their 20-15 vote sent the bill to Republican Gov. Dennis Daugaard. He has said that it seems like a good idea, but that he needs to study it more before making a decision.

To his credit, Gov. Daugaard said Wednesday he would meet with trans students before deciding on the law. He will meet with the Center for Equality, an LGBT group, and other trans advocates as early as Thursday. The governor said last week that he had never met anyone who was transgender.

The Human Rights Campaign president Chad Griffin released a statement on the matter, saying he hopes this meeting will sway the governor. "Knowledge is power, and we hope that by learning about their experiences, the daily challenges they face, and the damage this bill will inflict on their lives, Gov. Daugaard will show true leadership and reject this measure," Griffin wrote.

This remains the hope of South Dakota students, and the advocates of equality across the country.