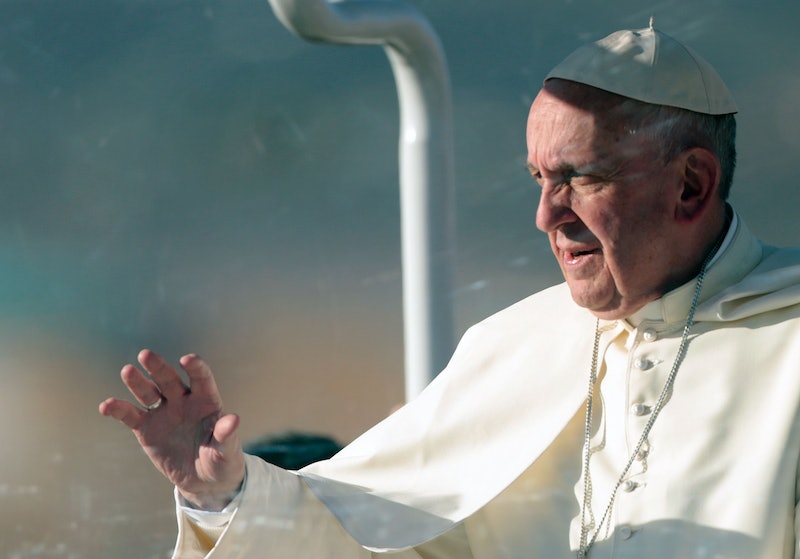 Pope Francis has just concluded a tour of Mexico and Cuba, during which he addressed issues of immigration and the plight of the poor. Though he's now heading back to the Vatican, he's leaving with one last, strong message for the United States about the state of the election — specifically, about the Republican front-runner in the race for the presidency. Pope Francis spoke out about Donald Trump, insinuating that the Donald was anything but Christian based on his politics and divisive rhetoric.

Speaking with reporters as he was looking to return home, the Pope also addressed criticism that had been lobbed at him by the mogul-turned-politician. Trump had previously questioned the prominent religious leader's trip to Mexico, and implied that such a visit was very political, which apparently isn't a good thing in the eyes of the candidate. Pope Francis had this to say about Trump:

A person who thinks only about building walls, wherever they may be, and not of building bridges, is not Christian. This is not the gospel ... Thank God [Trump] said I was a politician, because Aristotle defined the human person as 'animal politicus.' So at least I am a human person. As to whether I am a pawn, well, maybe, I don't know. I'll leave that up to your judgment and that of the people.

In addition to speaking out about Trump, Pope Francis addressed far more impactful issues that continue to make headlines, such as the Zika virus and an ongoing immigration crisis perpetuated by violent drug cartels that make the region unsafe. His final stop in Mexico was at the border town Ciudad Juarez, where he laid flowers at a memorial commemorating those who have died attempting to make the journey across the Rio Grande. That powerful gesture was followed by a mass attended by over 200,000 Catholics.

Regarding the Zika virus, Pope Francis was surprisingly progressive, expressing support for the use of contraceptives by those in high-risk areas. This decision was not without precedent. The Pope was quick to cite Pope Paul VI, who issued a declaration allowing nuns to use contraceptives in the 1960s due to major conflict in the Belgian-ruled Congo, where many had journeyed in an attempt to administer humanitarian aid. Such a dire situation called for an emergency exception. For Pope Francis to similarly address the Zika virus in such terms sends a strong message about the virus' prominence and danger.

Trump was quick to ignore what the Pope had to say about such issues, and instead has fired back against Pope Francis' criticisms of him. The Donald made rather bizarre statements at a rally in South Carolina, implying that ISIS had been targeting the Vatican. Trump stated that, were such an attack to occur, "The pope would only wish and have prayed that Donald Trump would have been elected president."

Such a statement certainly isn't doing Trump any favors, though Pope Francis has made it abundantly clear that there are more important things than what Trump has to say about him. He ended his trip to Cuba and Mexico on a positive note, tweeting, "I have felt welcomed and received with affection and hope by the Mexican people. Thank you for opening the doors to your lives."